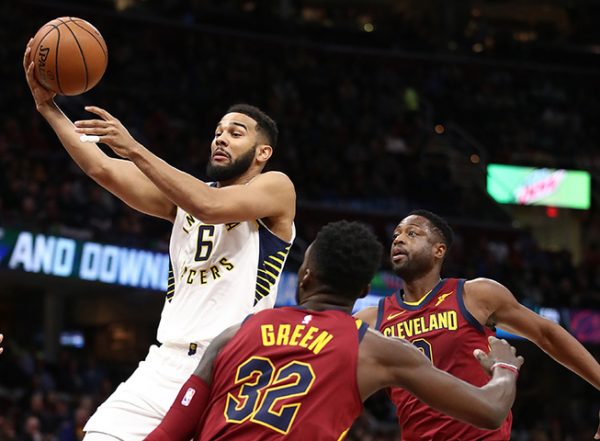 (Cleveland, OH) — Continuing a frustrating start that’s been plagued by defensive woes, the Cleveland Cavaliers lost their fourth game in a row and fifth in their last six in a 124-107 loss to the Indiana Pacers at Quicken Loans Arena on Wednesday night. The defeat drops Cleveland’s season record to 3-5 on the year.

Among the chief issues on the night for the Cavs’ defense were the 16 3-pointers they allowed off of 26 attempts. That 62 percent shooting percentage from long-range was in contrast to the the Pacers’ 36 percent average in that department prior to this contest. The vast majority of Indiana’s offense came from their starting five, which scored 106 of their 124 points on the night, with the team as a whole dishing out 35 assists.

Cleveland head coach Tyronn Lue spoke about how Indiana was able to flourish with their three-point shot:

“Some of them were off of our turnovers and some were just good shots,” Lue said.

LeBron James paced the Cavaliers with 33 points, collecting a double-double with 11 assists and adding six rebounds. Kevin Love joined him in the double-double department by scoring 13 and grabbing 13 rebounds off the glass. Derrick Rose added 19, while Jeff Green contributed 15 off the bench. While the Pacers thrived with their deep shots, the Cavs managed to connect on just 7-of-31 in the area of 3-pointers.

“We’re trying to figure things out on the fly and we don’t have time to do that,” James said. “For the most part, we were in the right position and in their face. They just hit some bombs.”

James committed eight of the Cavs’ 16 turnovers on the night and indicated that the total was roughly twice his usual amount during a game.

“I take full responsibility for our turnovers tonight because it starts with me,” James said.

During the first period, Indiana connected on 12-of-17 from the field until missing their final four shots for the quarter. Despite that brief cold spell, they still managed to connect at a 57 percent rate to take a 30-28 lead into the second period.

“They made tough shots and I felt we were aggressive on the ball,” Green said. “We had good looks, but we just missed them.”

In that second quarter, the Pacers increased their advantage to nine points at 49-40 with 6:06 left before halftime. At that point, the Cavaliers gained some momentum over the next few minutes, a surge that came in the immediate aftermath of James being struck on his right arm by longtime nemesis, Lance Stephenson, during a drive to the basket. The foul was ruled a flagrant 1, with James hitting both free throws, sparking 11 unanswered points by the Cavs to give them the lead.

“We did some good things tonight, but we have to sustain them for 48 minutes,” Lue said. “Our starters have to play better. They just need to get comfortable with each other and see what happens.”

To add insult to injury, Cavs center Tristan Thompson was forced to leave the game with 1:41 left in the second quarter because of what was determined by the team’s training staff to be a left calf strain. Despite Thompson’s injury being considered non-contact, he didn’t return to the game, having seen just 13 minutes of action. No indication was given as to exactly when he’ll be able come back.

By the time intermission had arrived, Indiana held a 62-61 lead, but they fell behind with just over three minutes gone in the third. However, the Pacers then ran off 11 straight points, part of a 25-14 run to close out the quarter that gave them a 91-83 lead heading into the final period.

Making a comeback during the fourth quarter proved to be an elusive quest for the Cavaliers, with James’ 14 points during the period going for naught. After falling behind 97-87, they ran off seven straight to make it a one-possession game with seven minutes left, then watched the Pacers run off seven points of their own to make it a 104-94 game. The Cavs would only get as close as six points the rest of the contest, with the Pacers then putting an exclamation point on their victory with a 13-2 run in the final three minutes.

“For us, we’re lucky this is happening now and not in April,” Green said. “But we’ll fix it. We’re working out the kinks, but everything’s not going to get changed overnight.”

The road doesn’t get any easier for the Cavaliers in their next contest, with a road trip to face the Washington Wizards coming up on Friday. Tipoff for that contest will be just after 7 p.m. ET for a game that will broadcast nationally on ESPN.