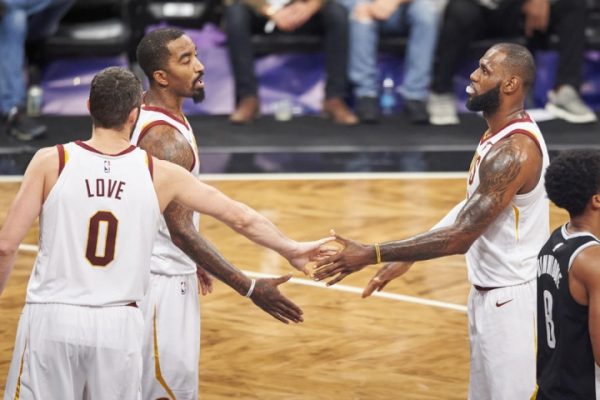 Finding a way to get back on the winning track was one of the focal points of the Cleveland Cavaliers‘ practice on Tuesday, with both the coaching staff and players seeking a way to end their current three-game losing streak and four losses in the last five games. Three of those defeats have come in embarrassing fashion, with poor defense being the continuing culprit.

Joe Vardon of Cleveland.com indicated that one of head coach Tyronn Lue‘s main takeaways following Sunday night’s home loss to the New York Knicks was that his veteran team is currently not physically fit enough to stay with other teams. In speaking with the players prior to practice on Tuesday, Lue reiterated that opinion and saw some immediate dividends from the discussion.

“Focused more on getting in better shape,” Lue said. “I see after today’s practice, watching us today, damn. It’s a big difference. I’m screaming play with pace, and move the ball, move bodies, we got to get in better shape to do that.”

Another factor is trying to blend in eight new players in order to establish the sort of chemistry that can help the Cavs reach their fourth consecutive NBA Finals. Lue feels that some new additions may be somewhat intimidated by being on the same team with LeBron James.

“I just told Jae Crowder and D Rose (Derrick Rose) and the new guys, just play your game,” Lue said. “Like, be aggressive, be who you are. LeBron and Kevin [Love] and those guys are unselfish, so they’re going to be able to adjust to you. We don’t want you to be worrying about if you’re taking too many shots or if you’re being too aggressive, running too many pick and rolls. Just play your game, and if you do it too much we’ll let you know.”

As poor as the defense has been, Lue also noted that the offense is also in need of improvement.

“I didn’t expect it to be like this right now, especially after our first two games of holding opponents to under 100 points and playing good defensively,” Lue said. “I think, offensively, we’re not playing as well as we should and as we can, so when you’re missing shots, you got to get back in transition every single time. You’re not making shots, that puts pressure on your transition defense. We got to do a better job offensively as well.”

Love doesn’t necessarily feel that the team’s physical fitness is at fault. Instead, simply getting comfortable being together on the court is a process that’s still in its early stages.

“I feel like where just our rate of play, our pace of play is even more so what I’m talking about,” Love said. “Maybe ‘out of shape’ is the wrong word. It’s just getting into our sets, secondary offense and miss or make, getting the ball out and pushing it. I think that’s more than anything what I’m trying to say.”

Such chemistry also is needed off the court, with Love indicating that James’ Monday night Halloween party helped take steps to address that concern.

“It was definitely a get-to-know-you moment with a lot of guys,” Love said. “So I think guys really … brought it and it was fun and for team camaraderie purposes, we all get along, have fun, but I think in some odd way it will definitely help us.”

The first opportunity to show that improvements are taking place will be on Wednesday night, when the Cavaliers host the Indiana Pacers in a game that will tip off at Quicken Loans Arena at just after 7 p.m. ET.