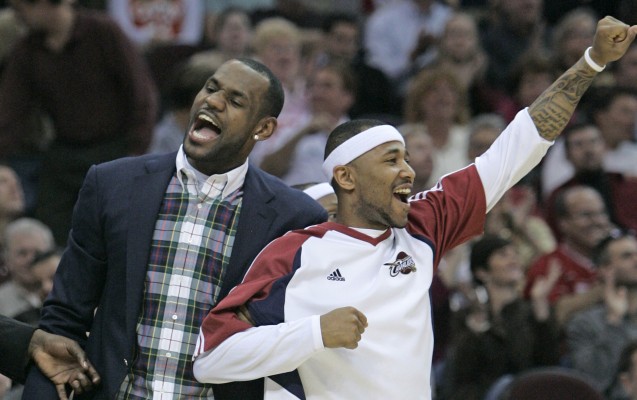 Veteran guard Mo Williams, a name from the Cleveland Cavaliers’ recent past, has apparently indicated that he would like to return to the team for next season.

The Cleveland Plain Dealer reported that sources close to Williams were saying that he was “more than interested” in the possibility of a reunion with the Cavaliers, who he played for from 2008-11.

The one fly in the ointment could be that Williams is reportedly looking for a multi-year deal. The Cavs may not either be open to more than a single year, considering Williams would be starting his 13th season, or may not be able to swing it due to the salary cap issues for next season.

Right now, the only possibilities to signing him are a taxpayer mid-level exception, which means Cleveland could offer a maximum salary of $3.469 million, or the veteran’s minimum, whereby they can offer just under $1.5 million.

Last season, Williams made $3.75 million while splitting his time between the Minnesota Timberwolves and Charlotte Hornets. In the latter case, he was traded in what became an ill-fated playoff bid by the Hornets. During his time in Minnesota last year, Williams showed that he was still capable of lighting up the scoreboard for 52 points against the Indiana Pacers on January 13.

For the season, Williams averaged 14.2 points and 6.2 assists. With Minnesota, those numbers were 12.2 and 6.4, respectively, while his point production jumped to 17.2 with Charlotte, with his assist average dipping slightly to six per contest.

Inevitably, one of Williams’ roles, if he were to sign, would be to back up Kyrie Irving. That would be somewhat ironic since Williams was dealt to the Los Angeles Clippers in February 2011, with the Cavaliers receiving a first round selection from the deal. That first round pick turned out to be Irving.

Williams would likely accept the mid-level exception if it were offered, given that the Cavs finished just two games away from the NBA title. However, a much harder sell would be getting him to accept the veteran’s minimum. The two sides can officially begin negotiating on July 1.