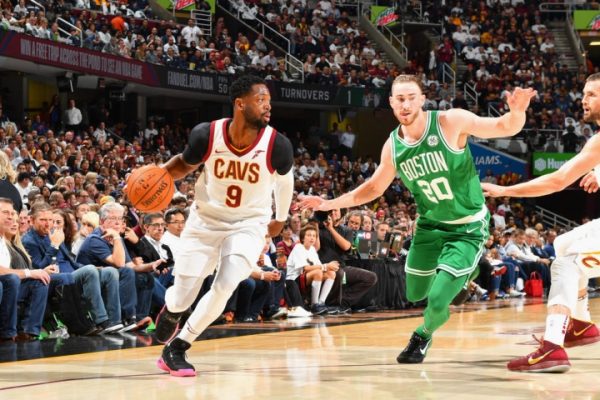 According to a report by ESPN’s Dave McMenamin, Cleveland Cavaliers shooting guard Dwyane Wade approached head coach Tyronn Lue about coming off the bench going forward. Coming off a recent loss to the Orlando Magic where Wade continued his struggles, the conversation evidently concluded with a permanent decision to insert shooting guard J.R. Smith into the starting lineup.

Most knowledgeable NBA minds believed bringing Wade off the bench was the common-sense move when the Cavs acquired the future Hall of Fame shooting guard after the Chicago Bulls bought Wade out of his contract. Smith, who won 2012-13 Sixth Man of the Year while playing with the New York Knicks, was dismayed and disappointed in learning he would be coming off the bench to start the season.

One thought not previously speculated is that perhaps Lue, Wade, and star forward LeBron James, were testing Smith’s resolve in seeing how he would respond to the benching, and understood Wade would eventually come off the bench for the Cavs.

In any case, the decision will help the Cavs in a multitude of ways.

1. Punch Off the Bench

The current version of Wade, as an aging backcourt player without a knockdown three-point game, was never going to work alongside James. James’ game works more efficiently with players who can get themselves open for catch-and-shoot situations or quickly get to the rim — neither of which Wade can do at this stage.

The 35-year-old Wade’s still crafty and has some bounce around the rim, but the “Flash” version who used to be able to get by any player disappeared a few seasons ago. What he can do, however, is eat clock with his ball pounding, distribute as a secondary ball-handler, and get to the line.

He’ll have more success with his current skill set versus most second units.

As experienced as anyone on the team in pressurized situations, Wade will settle down the second group during runs, and also create runs to hold or extend leads with James on the bench — the death knell for the Cavs in the NBA Finals versus the Golden State Warriors.

No longer needed to score 20 points a game, Wade’s contribution will come in clutch spurts that stop or turn around momentum in games. The three-time champion knows all the tricks and nuances, on both sides of the ball. Wade has always managed to get that timely steal or block, or that big “and-one” that clogs the opposition’s flow mid-run.

When Isaiah Thomas comes back from his hip injury, point guard Derrick Rose (currently out with an ankle sprain) will come off the bench. Wade and Rose, along with combo forward Jeff Green could provide a dynamic one-two-three punch — of players that could start for other teams — that should wreak havoc on the league’s second units — if Rose and Wade can work out their chemistry issues.

That Wade, a career-long starter, would volunteer to come to the bench speaks to his willingness to sacrifice. Wade has enough juice to cause a good bit of friction, had he continued to struggle as a starter and demand to stay on the court alongside James.

At this point, who on the Cavs can question his role if a highly respected 12-time NBA All-Star actively chooses to come off the bench to help the team?

Ever the professional, Wade’s decision sets a precedent for a loaded team and shows the league that he and the Cavs aren’t here to collect checks and Eastern Conference championship glory. The team’s focus lays squarely on locating the necessary chemistry and solidification of player roles that will find them peaking as the playoffs begin, on their road to another likely showdown with the Warriors.