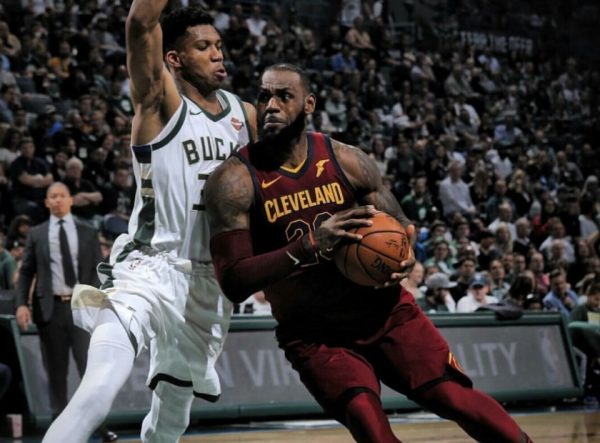 (Milwaukee, WI) — Using an 18-5 surge to close out the third quarter, the Cleveland Cavaliers remained undefeated with a 116-97 victory over the Milwaukee Bucks at BMO Harris Bradley Center on Friday night.

The Cavaliers were clinging to a three-point lead at 71-68 with four minutes left in the third when they put together their run, highlighted by a trio of unanswered 3-pointers from Kyle Korver, who finished the night with 17 points. Jeff Green then capped the run with a buzzer-beating putback that gave the Cavs an 86-73 lead heading into the final period.

Never able to get the margin back into single digits after that, the Bucks then watched the Cavaliers put the game away midway through that last period with consecutive three-point shots from LeBron James and J.R. Smith that made it a 104-86 game in favor of the Cavs.

Cavaliers head coach Tyronn Lue pointed out the contributions of Korver as the main component of success in the third quarter.

“Kyle Korver came in and really gave us a spark shooting the basketball,” Lue said. “He really opened up the game for us.”

James led the Cavs in the scoring department with 24 points, eight assists and five rebounds, one of six Cavaliers to finish the night with double figures in the scoring column. Kevin Love matched Korver’s scoring and collected his second-straight double-double with 17 points and 12 rebounds, while also chipping in with six assists. Jae Crowder tossed in 14 points, Derrick Rose added 12 and Green contributed 10 on the evening.

“We defended the ball well, then offensively, we started getting that ball popping in the second half,” James said. “We went over the game plan this morning and we executed it.

“We have different lineups we can go to at any point in the game, that’s the luxury of this team. We have seven new guys and for us to get a win here was huge.”

During the tightly contested first half, both teams held the lead, though the largest margin for Milwaukee was five points, while the 55-49 halftime advantage was the largest of the opening two quarters for Cleveland. The statistical numbers for both teams in the opening period were similar, helping to explain the 25-all deadlock when the horn sounded. Love paced the Cavs during those opening 12 minutes, notching 11 points and grabbing five boards.

“We just had it going on both ends tonight,” Love said. “We were really balanced and felt that we got a lot of contributions. Guys stepped up in playing our first road game.

“Everybody had a lot of communication on both ends. I think that’s big for us.”

Better and more balanced scoring by the Cavs in the second quarter saw them connect on 11-of-17 from the field, good for a 65 percent success rate. In addition, they reduced their turnovers to just two, compared to six in the opening period. Meanwhile, Milwaukee’s numbers were much the same as they were in quarter number one, though they committed five more turnovers to head to intermission facing a six-point deficit.

“I thought we just locked in and in the second half, we just cleaned it up defensively,” Lue said. “They’re learning to play together. We just have to keep figuring out.”

One of the only down notes on the night was Rose suffering a sprained ankle after the Bucks’ Greg Monroe came close to clotheslining him during a third-quarter drive to the basket. Rose was irritated about the fact that officials declined to call a flagrant foul on Monroe.

“I’m the only guy in the league that doesn’t get that call,” Rose said.

The Cavaliers return home to Quicken Loans Arena on Saturday night for a matchup against the Orlando Magic, with tipoff set for just after 8 p.m. ET.