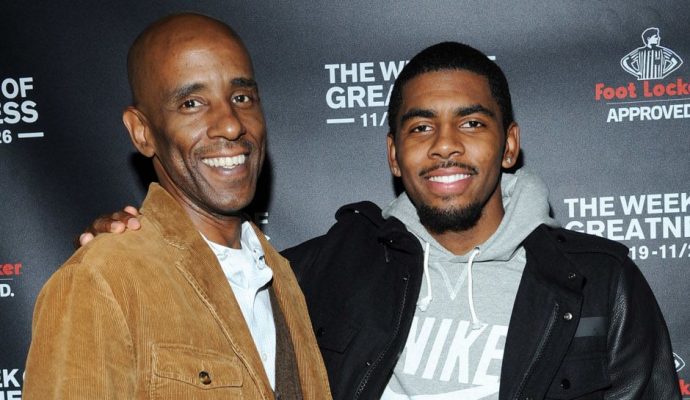 According to the report, three sources confirm a contentious event, where Mims had tried to exchange handshakes with the elder Irving, who refused to accept the pleasantry:

“Mims, one of James’ lifelong friends and an official Cavs employee, reached out his hand to slap Drederick five. But Dred, Irving’s father, pulled his own arm back and refused the gesture.

“When James later asked Irving about the incident and if there was something wrong, Irving said his father believed they shouldn’t be ‘fraternizing with the enemy.’ Three sources with knowledge of the exchange independently confirmed it to The Athletic, revealing just a glimmer of light into a fractured relationship that both men hid well during their time together.”

With that phrasing and the term “enemy” being the operative word, it’s unclear who’s received that particular designation in the eyes of Drederick Irving, who is reported to have been unhappy with Kyrie Irving’s treatment in Ohio.

Regarding these disagreements, Lloyd writes:

“While no one will admit it publicly, spend any amount of time around those involved in this divorce and it’s clear both sides feel wronged. Drederick was often upset with the organization throughout Irving’s six years here, whether it was the personnel they surrounded him with prior to James’ return, the coaching decisions or the way the organization handled Irving’s health. Even the negotiation of his rookie contract grew contentious.

“When Irving fractured his kneecap during the 2015 NBA Finals after he played in pain throughout the postseason, Drederick was furious in the locker room after Game 1, believing the Cavs did not care about his son’s health and well-being.”

Upon being told of the story reporting, Irving was playfully careful in not directly confirming either the event or his father’s words.

He told The Athletic:

There have long been reports of Irving’s unhappiness, with the Cavs and perhaps LeBron James, right up until his blockbuster trade to the Celtics.