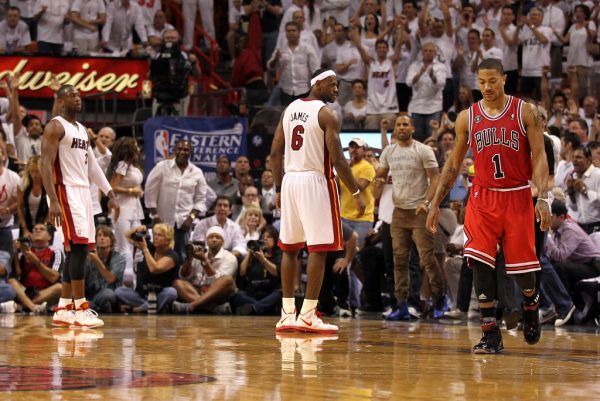 Long before the duo of Derrick Rose and Dwyane Wade joined LeBron James as members of the Cleveland Cavaliers this season, Rose had designs on the trio coming together where he began his career, as a member of the Chicago Bulls. That effort came in 2010, when both James, Wade and now-retired power forward Chris Bosh were free agents.

Dave McMenamin of ESPN.com notes that Rose filmed a video that year in which the guard made an effort to lure the trio to Chicago, citing the young talent that was already on the roster. Ultimately, Wade decided to remain with the Miami Heat, with James and Bosh joining him and then going to four consecutive NBA Finals and capturing two league titles.

The media perception at the time was that Rose was primarily at fault for not making more of an effort to recruit the trio, though the Bulls had made no mention of the video once James and Bosh joined Wade with the Heat.

“Oh yeah, yeah, I tried,” Rose said. “People always said that I didn’t recruit. I tried to recruit. I put out the video, but, it wasn’t for me to say that. I felt like it was for the organization to say that.

“(The Bulls) didn’t say anything about it,” Rose said. “They sent it, I don’t know if they really actually looked at it or played the video, but, I made the video, but at the time it really wasn’t for me to say that.”

More than a year after that effort, Rose seemed to indicate that he felt it wasn’t his job to lure players to play for the Bulls:

“I’m not going to do that,” Rose said at the time when asked about trying to convince guys to come to Chicago. “If you want to come here, come here, but it’s not up to me to make that decision. I’m not paying them.”

McMenamin explained the reason the story has been dormant for such a long period of time:

“When asked why this revelation was just coming to light now, Rose replied, ‘I just wanted to see who had my back,’ presumably referring to members of the Bulls front office that could have corrected the perception that Rose was hands-off by telling the media about the video that was filmed.”

Despite that seemingly widely held belief, James made clear that Rose did contact him directly during the process:

“He was basically saying, ‘Everybody is out here saying that I don’t want you to come here and saying that we can’t play together,'” James said. “He said, ‘I’d love for you to come to Chicago because all I care about is winning.'”

Wade said that such a recruitment really wasn’t necessary for Rose to undertake and cited that playing together with James and Bosh in Miami was in all of their best interests.

“That’s not his personality,” Wade said. “Don’t want to do something that’s not in someone’s personality. We knew he wanted us to come in. He didn’t have to be on our line all the time. We knew that. We just made a decision that was better for us.”

Rose, Wade and James are too focused on winning in 2017-18 to be concerned with what took place seven years ago. Still, Wade is excited about the potential of the Cavaliers.

“We haven’t discussed it, honestly,” Wade said. “We’ve really just been focusing on here. We’ve only been together a little over a week and LeBron has been out, so we haven’t even been together whole on the basketball floor. But I have spoken to the media. From my standpoint I thought there was two times I might play with D-Rose. I thought the Miami Heat was getting the first pick in 2008. I thought we was going to play with D-Rose. Didn’t get that one. Then in 2010 came an opportunity and that didn’t happen. And then the time when you least expect it, it happens. That’s the league we play in. I just love getting to know him, love how he looks, how comfortable he looks here, the way he’s playing right now. We’re thankful to have him, especially with (Isaiah Thomas) being out, to have a guy like D-Rose to step in and be the starting point guard, how many teams have that luxury?”