J.R. Smith: ‘LeBron’s Going to Be Wherever the F— He Wants to Be’ 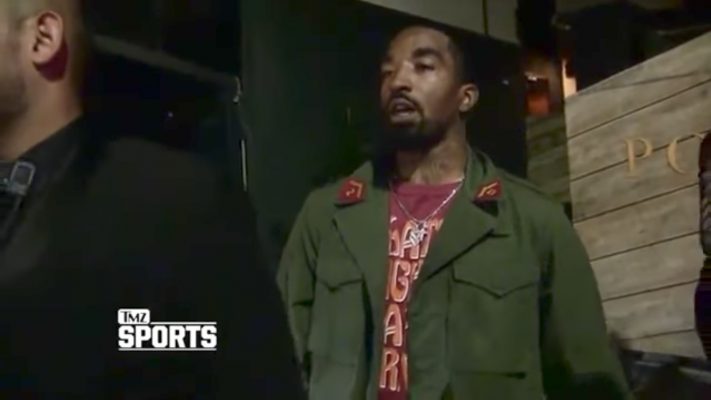 While LeBron James and his Cleveland Cavaliers teammates prepare for the 2017-18 season, most members of the media are already looking to the next NBA offseason. Though the season has not even begun yet, many have speculated that James may decide to continue his NBA career in Los Angeles.

In a video posted Friday, a TMZ paparazzo asks Cavaliers guard J.R. Smith about James’ future as he left a Los Angeles restaurant.

Considering Smith’s reaction, the questions have certainly begun to weigh on James’ teammates.

Though Smith was clearly unhappy to be bombarded by questions and cameras, the TMZ reporter attemped to get further under Smith’s skin.

Moments later an offscreen voice asked what Smith thinks is in store for James’ future:

“Do you think LeBron’s going to come to LA?”

Clearly annoyed, Smith approached the photographer and gave him a piece of his mind:

“I think LeBron’s going to be wherever the f— he wants to be at.”

NBA stars are certainly used to being the topic of conversation for sports analysts and reporters, but the circus around James’ future is unlike anything in sports. Hopefully, Smith and the rest of his teammates are able to keep a cool head as the season begins and speculation regarding James’ future intensifies.