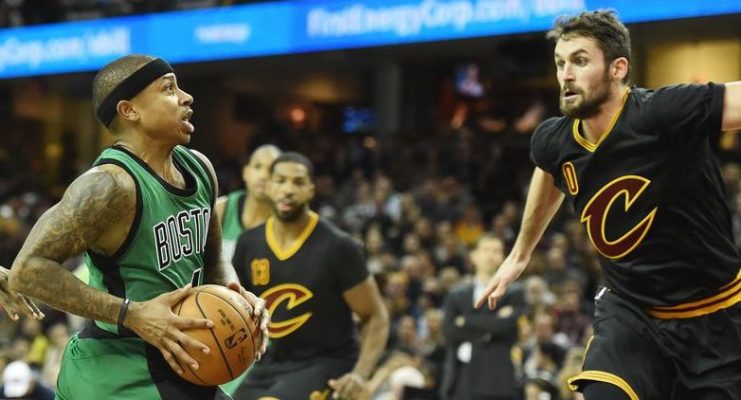 Moments after the blockbuster trade between the Cleveland Cavaliers and Boston Celtics became official, Kevin Love reportedly rolled out the welcome mat to Cleveland’s newly acquired point guard Isaiah Thomas, who was also a former AAU teammate of Love’s.

It will be a reunion in Cleveland for Kevin Love and Isaiah Thomas (h/t @ballislife) pic.twitter.com/BCe2uOATpo

Five minutes after Isaiah was informed of the trade he got a welcome text from his AAU co-star. https://t.co/r0Cx6xSYvO

The two also played on the same sixth-grade AAU team. In fact, Thomas, who lived three hours away in Washington, would often take a train to Portland, Oregon to stay with Love’s family.

“And then Kevin and his dad Stan, they would come pick me up and I would stay the weekend at his house so I could play on that AAU team,” Thomas told The Vertical Podcast earlier this year. “It’s something that me and Kevin, we’ll talk about. It’s crazy that we’re both in the NBA and he is at the level he’s at, and I’m doing pretty well. To be able to say that I used to go to his house every other weekend and stay the night, and his parents used to cook dinner, and all that type of thing, it’s crazy to see that.”

Cleveland.com reports that Love was listed as the fourth-best player, while Thomas was the 24th at the following year’s ABCD camp. Here’s a breakdown of their performances at the camp:

Kevin Love, C: “Three losses in a row for the big man, but it’s not his fault. He’s still doing his work in the post and on the glass, but there’s a chemistry problem on the team. The one area where Love isn’t quite as effective as usual is passing, but he’s scoring dominating in every other facet.”

Isaiah Thomas, PG: “Not normally known for playing under control, the Washington-bound point guard (and we use that term somewhat loosely) has shown the ability to run a team here rather than just trying to score – which he normally does. Give him a lot of credit because he’s playing with a purpose and it’s working.”

Ironically, over the past few years, the NBA has become an AAU-like league. It will be interesting this year to see if the two friends can help the Cavaliers return to the NBA Finals.

When he's not writing about sports, music and entertainment, John can be found coaching his two boys in basketball and baseball or watching movies with his lovely wife, Maria. Considering Northeast Ohio is home, John has been cursed with teams that have consistently left him disappointed. Still, Go Cavs, Go Browns, Go Indians.