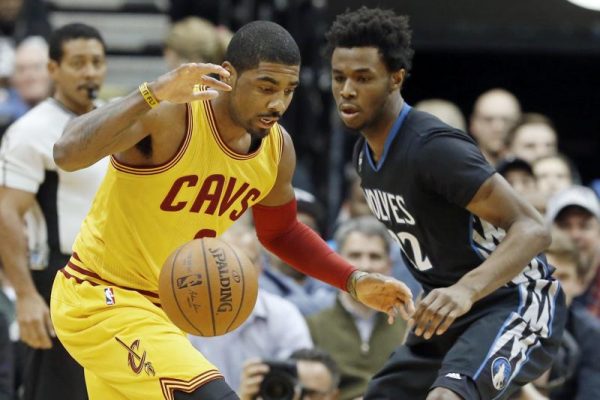 Many teams have voiced their interest in disgruntled Cleveland Cavaliers point guard Kyrie Irving, but according to Sam Amico of AmicoHoops.net, two teams have separated themselves as the clear favorites to land the young All-Star.

Amico broke down the likeliest destinations for Irving on a recent podcast:

“They’re (the Cavs) getting traction with some of these teams,” he began.

He then broke down what the Cavs are specifically looking for out of a trade:

“With teams like the Phoenix Suns, the Cavs are getting traction and really open to discussing this more and exploring things a little bit more in depth than say the Orlando Magic,” he said. “Because frankly the Cavs would love to get a good veteran, a first-round draft pick, and a nice young player. And they can shoot for that.”

He went on to discuss the Suns in greater detail:

“Number one I would say Phoenix is, you know, that’s the team that’s being rumored most and there’s a reason for that, because they are —  the Cavs and Suns — have been pretty deep into some of these talks. Obviously Eric Bledsoe being a Klutch Sports guy, and Rich Paul, the agent who represents LeBron James, Tristan Thompson, and J.R. Smith, among others, also represents Eric Bledsoe from the Suns. And then you have the James Jones connection. James Jones just went there as basically their number two guy under general manager Ryan McDonough,” he explained. “And you have the fact that Phoenix would love to get a player like Kyrie Irving because, as I wrote in the column, Kyrie Irving is going to put fans in the seats.”

He broke down what would likely go into a trade:

“Let’s focus on Phoenix, I think that’s the number one spot Kyrie Irving could land. Only because you could have Eric Bledsoe, and we’ve heard all these trades, if you’re a die-hard, you know what I’m going to say. It’s Eric Bledsoe, Josh Jackson, and one of the Suns’ first-round picks next year,” he said. “I think the Cavs would be open to Eric Bledsoe, and Marquese Chriss, T.J. Warren, and that first-round pick. The Cavs really want that first-round pick because, look, they don’t have a lot of draft picks and they have got to start growing organically through the draft and not rely on free agency so much.”

He then listed the second-most likely team to land Irving:

“I think team number two, and you probably know what I’m going to say, the Minnesota Timberwolves. Well guess what they have, Andrew Wiggins, and they have a love of Kyrie Irving there,” he said. “We’ve heard the reports that the Timberwolves won’t move Wiggins, and you know, maybe they’re too hesitant. But I don’t know, if you have Jimmy Butler and you have Karl-Anthony Towns who are pushing for a Kyrie Irving trade, they’re obviously not pushing because they’re going to get dealt. It would have to be somebody like Wiggins. So that’s an interesting situation there because Wiggins has to know that Butler and Towns are pushing for a Kyrie trade and he has to know that they know he would be the guy to be moved.”

Along with the inclusion of Wiggins, Amico was blunt about in his assessment of how the Wolves could get a trade done:

“Put it this way, the Timberwolves have a first-round pick and that would interest the Cavs.”

He concluded with the fact that these two squads clearly have the most to offer:

“Those are two teams, the boxes are all checked, and I think the Cavs are more engaged with those two teams than they are anybody else in the league. I think that they’re engaged with other teams. I just think that Phoenix and Minnesota are the frontrunners for Kyrie Irving and that would be good news for both of those teams who really want him,” he said. “But are they willing to pay the price for him? I think eventually the Phoenix Suns will pay the price that the Cavs want.”

Amico foresaw one more possibility that would likely upset the fan bases of all three clubs:

Clearly there is still quite a ways to go before Irving calls a city other than Cleveland home, but these rumors are definitive proof that multiple teams are doing their best to get Irving in a different jersey for the 2017-18 season.