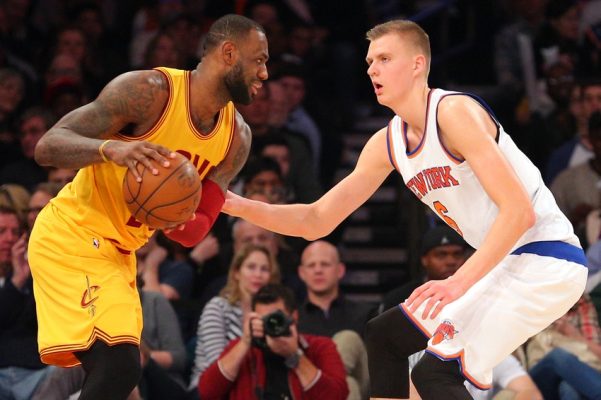 The scope of the Cleveland Cavaliers’ trading partners for point guard Kyrie Irving extends far beyond the four teams that he prefers to be dealt to before the start of the 2017-18 NBA season gets underway. Yet when it comes to one of those four teams, the New York Knicks, the Cavaliers are only interested in making a deal if they can acquire one particular player.

That player, according to Terry Pluto of Cleveland.com, is center Kristaps Porzingis:

“The only player the Cavs would really want from New York in an Irving deal is Kristaps Porzingis. It’s very unlikely the Knicks would part with their gifted 7-foot-3 center.”

Some of the key reasons for Cleveland’s interest in the 22-year-old are his size, youth and team-friendly contract. Porzingis has played just two years in the league, yet has shown clear signs of becoming a force in the years ahead. Last season, he averaged 18.0 points 7.2 rebounds and 2.0 blocks per contest. In addition, he would blend in well with the Cavaliers’ long-range shooting contingent, having connected on 35.7 percent of his  three-point attempts during the 2016-17 season.

Porzingis is still playing on the rookie contract that he signed in 2015 and could conceivably be a huge asset not only this year, but also if LeBron James decides to go elsewhere in free agency after the upcoming season.