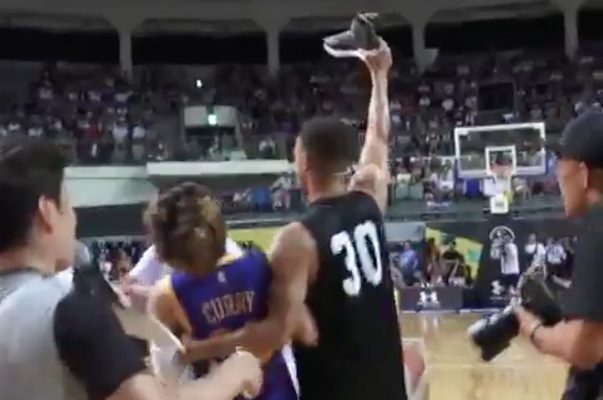 Stephen Curry continued his offseason Asia tour in Seoul, South Korea this week and it seems he’s intent on extending the rivalry between the Golden State Warriors and the Cleveland Cavaliers to every corner of the world.

In a recent video, a fan dressed head to toe in Curry’s Warriors gear can be seen sinking a three-point shot. The fan then mimics Curry’s recognizable high-step celebration and even shares a mid-air chest bump with the two-time NBA MVP.

Curry then approaches the fan and quickly realizes he is wearing a pair of LeBron James Nike LeBron Soldier 10 sneakers. Curry promptly yanks the kicks off of the ecstatic young man’s feet and replaces them with a pair of his own Under Armour Curry 3ZERO shoes.

This is the third time Curry has traveled to Asia with Under Armour, but the first time he has visited Seoul, the final stop on his trip. Now that he’s nearly headed home, it’s clear Curry already has next season, and the Cavs, on his mind.