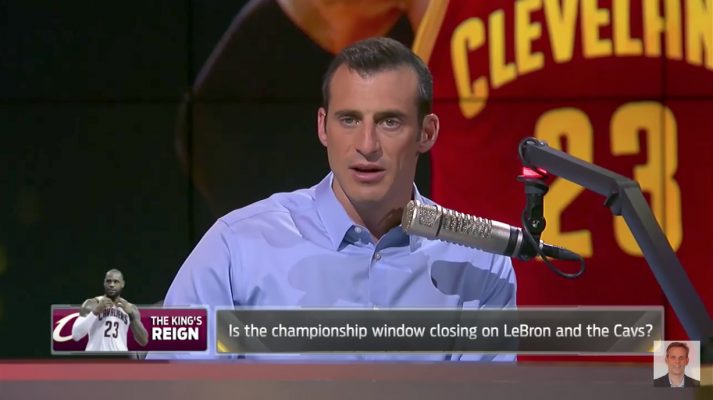 The criticism directed at the Cleveland Cavaliers for their lack of activity during the offseason has largely been directed at team owner Dan Gilbert, with his inability to negotiate a new contract with former general manager David Griffin seen as a key reason for the issue. However, one NBA analyst points the blame in the direction of LeBron James, citing the superstar’s expectations of the team to pay teammates top-dollar salaries.

Doug Gottlieb, who was taking the place of the vacationing Colin Cowherd on his FS1 weekday program, “The Herd,” directed an extended criticism at James that focused on his perceived role in the team’s salary-cap trouble.

“He’s not the general manager, but he’s pushed the general manager and the owner to spend on his guys, on his team, and they have responded in kind and that’s why they’re in luxury tax hell. People, if you want to make the Kevin Love trade, we got you over a barrel because we know you need to add assets and your best asset is screaming for you to do so.

“Look, I’m not saying that all the front office problems that Dan Gilbert wanting to step in and fire David Griffin that’s all on LeBron James, but this idea that none of this is his doing is simply a lie and it’s LeBron James smartly creating this narrative of, ‘I have given and done for Cleveland all that I can do and when I leave at the end of next year, it’s not me, it’s all of them,’ because that’s how LeBron James rolls. ‘It’s not me, It’s all of them,’ and that’s frankly not what the greatest player on Earth is supposed to do.

“On some level, great leadership is about pointing in, even when it’s not your fault. That’s what every great coach will tell you. They’ll tell you if their best player is accountable, if their best player accepts the failure of others. Even if the best coaches will come out afterwards and say, ‘That was on me.’ Even if it wasn’t. You know, ‘I made a mistake, I shouldn’t have substituted there.’ You know the player screwed up, the player knows he screwed up. But when you take away some of the onus from the player, you end up helping him battle back from it or her battle back from it and LeBron James putting so much of the blame on everybody else when his agent, his pushing, has caused their salaries to be bloated, to me, is not befitting of somebody who we consider one of the greats of all-time.”

Gottlieb said that James should have gone to both Smith and Thompson and suggested that they take less money and even suggested that James could have taken less. In addition, Gottlieb criticized James for negotiating for a salary cap as part of the NBPA and then criticizing it.

Right now, Cavaliers fans are simply hoping that one year from now, James is still a member of the team.