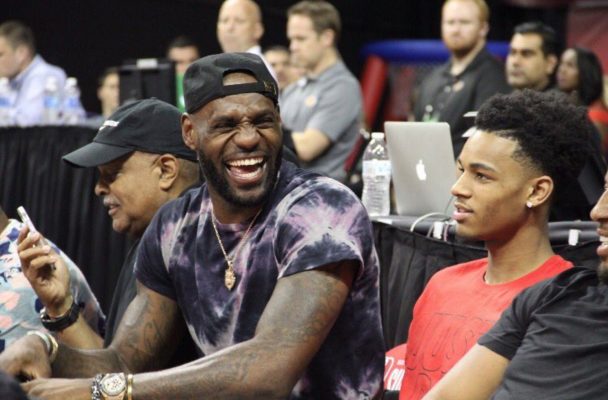 Cleveland Cavaliers superstar LeBron James was in attendance for the Los Angeles Lakers’ summer-league matchup against the Philadelphia 76ers on Wednesday night, and one of the biggest reasons for his appearance was to watch Lakers rookie sensation Lonzo Ball.

It’s been rumored that James has his eyes set on Los Angeles after the 2017-18 season, and his ditching the ESPYs in order to watch Ball may jumpstart the rumors once again.

Surprisingly, the former UCLA product ditched his signature Big Baller Brand shoes on the night and instead wore a pair of Kobe Bryant Nikes.

After the game, James made a comment on Ball’s shoe selection, as James is sponsored by the giant footwear company.

The intention of James’ message will surely be up for debate across all media outlets and will spread like wildfire, but perhaps the four-time MVP is simply recruiting Ball to a company in which he already has a billion dollar deal in place with.