LeBron James Hater Gets Disrespectful Tattoo on His Calf 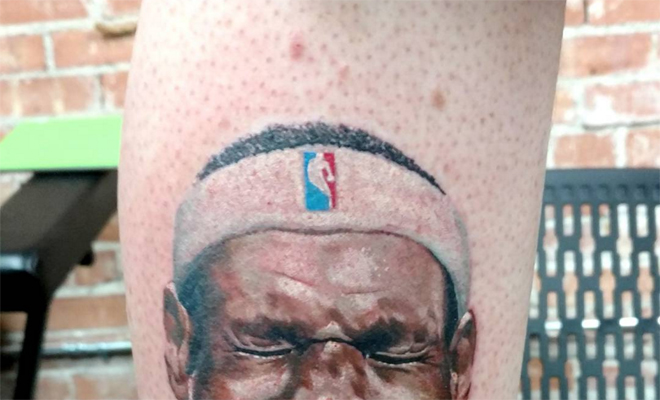 As long as LeBron James is in the NBA, his play will continue to be compared to that of Michael Jordan‘s. For most, it is an interesting and entertaining way to analyze two of the most dominant players in the history of the sport, but for others, namely Kalen Gilleese of Salt Lake City, the comparisons are disrespectful to Jordan’s legacy.

To show his disdain for the parallels many make between the two players, and for James himself, Gilleese decided to tattoo a large image of James’ crying face on his leg.

“He’s always flopping, crying, looking for fouls. I’ve never had a lot of respect for him,” Gilleese told CNN.

One of my best friends is a die-hard Jordan fan, and can't stand LeBron. He asked me to tattoo a crying LeBron in honor of his loss to Golden State. How could I say no? This is the first that will lead to a full leg piece. Thanks @art_kalen. . . . #lebron #basketball #cryinglebron #art #artist #tattoo #tattooartist #skinart #utahtattooartist #utah #utahisrad #utahisawesome #801 #slc #slcart #utahartist #appointment #blaquesaltstudio #blaquesalt

Gilleese said the tattoo, which took three hours to complete, will bring him lifetime joy.

“Every time I look at it I laugh, and I like to show it and make people smile,” he said.

He added that he plans to convert his leg into a tattooed sports legend Hall of Fame, including Tom Brady, Wayne Gretzky, and Michael Jordan.

“LeBron is definitely a legend,” Gilleese admits. “But he’s the biggest crybaby legend of all time.”