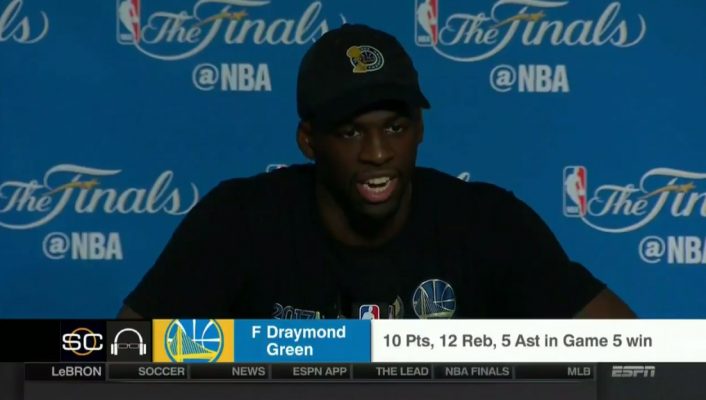 After winning an NBA championship on Monday night, Golden State Warriors forward Draymond Green was actually able to practice some self-restraint in his postgame remarks, letting go of some animosity that had developed during the team’s five-game series with the Cleveland Cavaliers.

In remarks to the media, he singled out Cavaliers veterans Richard Jefferson and J.R. Smith, as well as any doubters that were originally going to be targets of his criticism before he decided to practice a more mature outlook.

draymond just admitted he wrote down a list to make sure he bashed richard jefferson, the media and jr smith ? pic.twitter.com/6AJNYjg46o

“I wrote down this stuff like, man, I’m gonna say this, I’m gonna say that,” Green said. “I was going to bash everybody who talked junk. I felt that R.J. (Jefferson) was talking junk the whole series, then the media.

“J.R. said some things. I’m like, ‘I’m gonna bash everybody,’ and then, like, nah that’s a championship team. They stepped up the whole season, they were great and you gotta give those guys a lot of credit.”

The meeting between the two teams marked the first time in NBA history that the same two teams faced each other in three consecutive Finals. One player that Green didn’t mention, LeBron James, also became the first player ever in NBA Finals history to average a triple-double in a series.