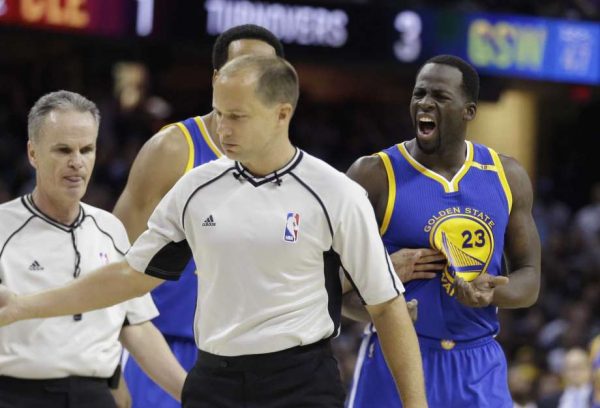 In an effort to clear up the confusion involving a first-quarter technical foul during Friday night’s NBA Finals Game 4 contest between the Cleveland Cavaliers and Golden State Warriors, head referee Mike Callahan and referee John Goble explained the circumstances surrounding the incident in which Warriors head coach Steve Kerr was seemingly given a retroactive technical, instead of Warriors forward Draymond Green. Goble indicated that he “failed to properly communicate” that Kerr was the recipient of the technical and not Green.

Joe Vardon of Cleveland.com noted that inattention by the officials was the cause for the confusion:

“Callahan and Goble said they weren’t aware Green was marked down for the first technical, instead of Kerr, until the scorer’s table informed them Green should be disqualified.”

Green had apparently been assessed the first-quarter technical for complaining about a foul call after he had struck the Cavs’ Iman Shumpert. The public address announcer named Green as having been given the technical and the scorers’ table duly noted the technical on the stat sheet, with no attempt made to change the call to Kerr by officials. However, with 6:18 left in the third quarter, Green was given a second technical foul, with the assumption being that he had been ejected. Only then, did the error come to light.

Callahan offered this reasoning for the mistake:

“We did not do a very good job of listening to the PA announcer and we did not hear him announce it. I take full responsibility for that,” Callahan said.

Even Kerr was under the impression that Green was going to be ejected for the third-quarter technical:

Not surprisingly, Green claimed that he was aware that Kerr had been given the earlier technical and that he shouldn’t have been assessed the third quarter penalty:

“I knew I didn’t have a technical foul (from the first quarter),” Green said. “But (I’m) still trying to figure out why I did get the second one.”

The game itself ended with seven technicals being called, while one flagrant foul was also assessed. For the Cavaliers, one of the technicals that they received was given to rarely used Dahntay Jones for arguing with the Warriors’ Kevin Durant. Jones was unapologetic about being given the technical:

“I’m standing my ground,” Jones said. “He comes to me and is saying something disrespectful. I speak to him, they T me up. OK. Fall in love with the superstars. That’s cool. That’s fine.

“Did y’all watch Draymond Green talk behind the ref’s back to Tristan Thompson?  As soon as the ref turns his back, he’s got something to say.”

The Cavaliers and Warriors now head back to Oracle Arena in Oakland for Monday night’s Game 5 contest. The Cavs still face a monumental task in trying to come back from a 3-0 deficit, something that no NBA team has ever done. Tipoff for Monday’s clash is just after 9 p.m. ET.