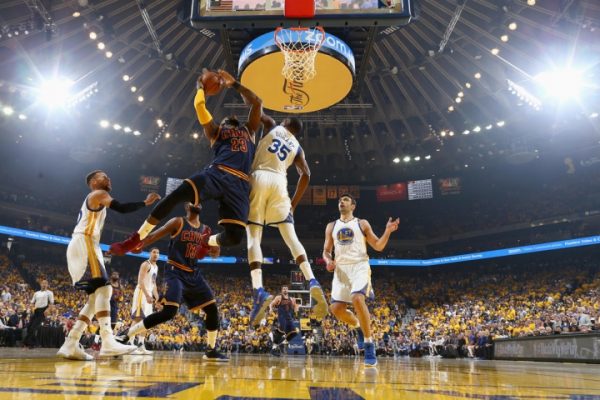 (Oakland, CA) — A slow start and finish in the third quarter proved to be devastating to the Cleveland Cavaliers as they dropped a 113-91 decision to the Golden State Warriors in Game 1 of the NBA Finals at Oracle Arena on Thursday night. The Cavaliers were also handicapped by ending the game with more turnovers (20) than assists (15) and most of the team struggling with their shot from the field.

The Warriors had held a 60-52 lead at the break, then scored the first 13 points in the third quarter to take a commanding 21-point lead. Cleveland was able to reduce its deficit down to 12 on a Kyrie Irving layup with 3:05 left in the period, before then watching Golden State effectively put the game away by scoring 11 of the next 12 points. By the end of the quarter, it was a 93-72 game.

“We had a few too many mistakes and then they jumped on us to start the second half,” Irving said. “There’s no way you can simulate the Warriors’ offense. We have some things that are correctable.”

The Cavs were unable to muster much effectiveness on the offensive side throughout the game, shooting just 35 percent for the contest. That number was even worse when taking away the shooting of LeBron James and Irving, who combined for 52 points on the night, and magnified by the turnover problem. In contrast, the Warriors committed just four turnovers, matching a record-low for an NBA Finals contest.

“We have to be able to make shots and move the ball,” James said. “We were victims of our own mistakes. We gave up a lot in transition, because they scored 27 points.”

James collected a double-double with 28 points and 15 rebounds, while also adding eight assists, with Irving contributing 24 points and three rebounds. Outside of that duo, the remainder of the team shot a miserable 25 percent on 11-of-44 from the field, with Kevin Love the only other Cleveland player to reach double figures in scoring. Love ended his night with a double-double with 15 points and 21 rebounds.

“They’re a team that’s capable of big runs and they showed that tonight,” Love said. “We made a ton of turnovers and that’s to their credit.”

On the defensive end, the Cavs seemingly had no answer for the duo of Kevin Durant and Stephen Curry, who combined for 66 points. Durant was especially lethal during the first half, scoring 23 of his 38 points. For the game, the Warriors were able to put up 106 shots, compared to just 86 for the Cavaliers.

“When you’re playing a team like that, you can’t give them 20 more shots,” Lue said. “We also have to do a better job of putting the ball in the basket and we have to make it tougher on him (Durant).”

In the opening quarter, the two teams began by shaking off some of the rust from not having played for a week or longer. That kept the margin tight on both sides of the scoreboard before the Warriors concluded the period with a 35-30 lead.

Some of the main problems for the Cavaliers surfaced during the first 12 minutes, including issues on the offensive glass and controlling play in the paint. The latter category was especially problematic, with Golden State holding a 42-16 scoring advantage during the half.

“That (problems in the paint) led to us not being able to set our defense and get back in transition,” Love said. “We know there’s a lot of stuff that’ll be hard to look at tomorrow, but we’ll learn from it and get better.”

The chief beneficiary of those struggles inside was Durant, which coupled with 10 second-quarter turnovers, resulted in the Cavs falling behind by as many as 10 points during the second quarter. When halftime arrived, the Cavaliers were trailing 60-52.

“We have to make a conscious effort not to turn over the basketball,” Irving said. “They capitalized on a lot of our mistakes on transition, a lot of easy baskets that we can’t allow going into Game 2. Definitely a lot of things that we can correct and get better at when we watch film tomorrow and go from there.”

James and Irving served as the main source of offense for Cleveland during the half, combining for 36 points, while Love was the only other scorer of note with eight points.

“There’s no time to be disappointed, we just need to be thinking about the next game,” Irving said. “Going into Game 2, we’re be more settled in and we’ll be better,”

The two teams meet up again for Game 2 on Sunday night at Oracle Arena, with tipoff set for just after 8 p.m. ET.

“We didn’t play very well, but we know we’re capable of being better,” James said.