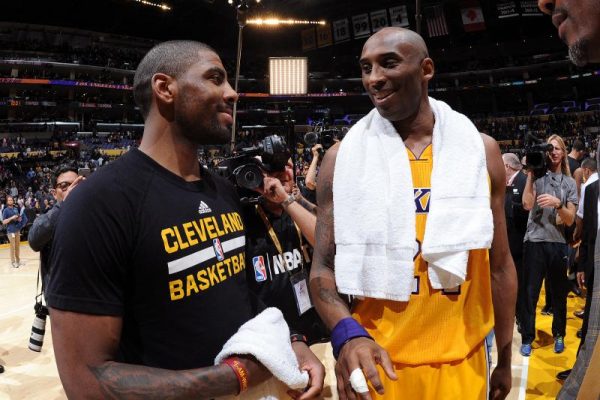 The relationship between Cleveland Cavaliers point guard Kyrie Irving and teammate LeBron James has been the source of plenty of conjecture over the past three seasons, with some people under the belief that the two could end up feuding like one-time Los Angeles Lakers teammates Shaquille O’Neal and Kobe Bryant. In order to avoid that scenario from taking place, Irving has spoken with Bryant about the issue.

ESPN’s Dave McMenamin wrote about how Irving and Bryant had previously established a connection that now puts Bryant in the role of a mentor for the sixth-year guard. Due to that bond, Irving went directly to Bryant to make sure that none of the pitfalls that once doomed the O’Neal-Bryant relationship occur with the Cavaliers.

“It’s a tough balance,” Irving said. “Because everyone knows, Shaq was really dominant and [had] a lot of the individual accolades … unbelievable. And that’s who he was. And Kobe was just consistently working on his game and consistently trying to prove everyone all the time. And you got to commend somebody for that. That just shows the true testament of their will and what they’re willing to do and what they’re willing to sacrifice, but I know I don’t want to look back and say that I let my selfishness get in the way of us winning championships, because we have unbelievable talent on this team and unbelievable players, and so I don’t want to ever take that for granted.

“Whenever that time comes and it’s my time to be the leader of the franchise, then I’ll be well-prepared. But for now, I’m cool with just being — I’m very, very cool with being — a great guy on a great team.”

When the O’Neal-Bryant connection was thriving, the Lakers won three consecutive titles from 2000-02. However, that relationship slowly eroded and resulted in Los Angeles coming up short of an NBA title during the next six seasons, a period during which O’Neal was dealt to the Miami Heat.

Irving and James are seven years apart in age, the same age difference O’Neal and Bryant shared. In contrast to the ego issues that caused the latter’s disintegration, James has made an effort to promote Irving’s prowess on the court.

“First of all, I don’t know how Kobe and Shaq managed their partnership. All I can know, from the outside looking in, [is] that it didn’t work out,” James said. “For me, I see Kyrie growing every single day and wanting to be great. And so me, I just try to give him the blueprint, as much as I can. You know, his experiences, he’s going to learn on his own as well, and that’s what he should do, but all I can do is give him the blueprint, and that’s it. Because he’s going to be around a lot longer than me.

“He’s 25. He’s got at least 10 more years. I don’t. So I want to give him the blueprint and see what he [can] do with it. You know, no matter if we’re teammates for the rest of his career or for the rest of my career, listen, it won’t be because we didn’t want to play with each other no more. It will never be that.”

Following the Cavs’ comeback victory against the Boston Celtics in Game 4 of the Eastern Conference Finals, James spoke about Irving’s leadership ability that saw him score 21 points in the third quarter.

“When you build a championship team, you got to have guys that are willing to step up, and obviously we got a special guy in Kyrie who was just like, ‘All right,'” James said. “They kept it at bay. That’s all I was thinking, like, ‘Just don’t let it get out of control.’ That’s all I ask, and I’m going to redeem myself in the second half.

“He basically was just waiting for an opportunity to be able to blossom, and I’m just happy and blessed that when I decided to come back that I was able to help him blossom, I guess, because he gets to play in games that he’s always been built for. He was already built for it. His game was built for it, and I’m happy, like I said, to be able to, I guess, sit back with four fouls and see him do what he’s always been built to do. He was born for these moments.”

The inevitable transition from James to Irving when it comes to being the leader of the team is likely still a few years away, with Irving noting that there’s no rush.

“It hasn’t been anything short of difficult, trying to figure out when will it be my time,” Irving said. “And the honest answer from me is that I cannot give any energy to anything that [outside] people say would be best for the team or even sometimes what I think would be best.

“My job is to be in the moment, especially with an unbelievable player like him (James). You have to just enjoy the ride just as much. You know, individual goals that you have, to just push to the side, because this team, nothing is promised, and who knows what would happen down the line, and this is probably hands down the best team that I’ve ever played with and probably will play with if we all stay together.

“But you know, you just have to be really confident in who you are as a person and stay true, and then make decisions from there and be able to apply basketball at a very high level, and you can’t cheat the game. … I’ve learned from some of the best that have played this game, and you can’t cheat it. I’ve become more of an observer as well as a leader at the same time, which I’m super proud of. So it all comes with the great veteran leadership we have on this team that allows me to do that.”

Ironically, despite the close nature of the Irving-Bryant relationship, Irving has made a closer study of Michael Jordan, a player that James reveres.

“All I do is … I read a s— ton of books on him,” Irving said. “And a lot of their … footwork compilations on YouTube.”

Irving’s growth as a player hasn’t gone unnoticed by Cavaliers head coach Tyronn Lue, who cites the influence of James in helping that growth develop.

“I just think he’s grown as a player since I’ve been here,” Lue said. “Each year he’s grown. All the other stuff — about being a professional, taking care of your body, eating right, training — I think LeBron has done a good job of just showing him that way,” Lue said.

While James is 32 years old and in his 14th NBA season, he’s definitely not showing any indication of slowing down. That appears to be fine with Irving, who has the benefit of Bryant’s comparative perspective in dealing with what lies ahead in the coming years.