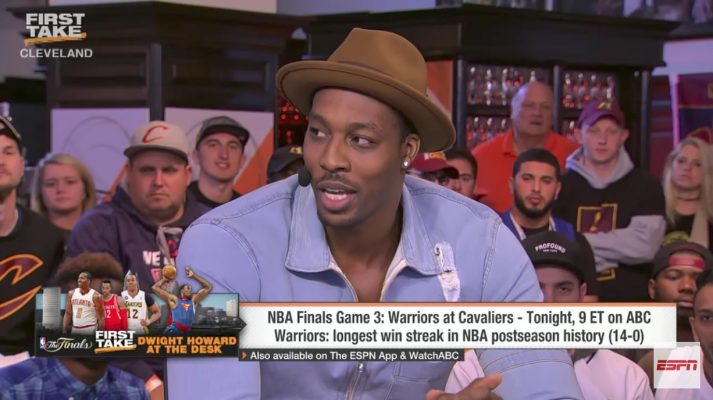 The strong performance of Golden State Warriors forward Kevin Durant during the NBA Finals has overshadowed the continued consistent play of the Cleveland Cavaliers‘ LeBron James. It’s also seemingly made others suddenly offer their opinions about the two players, with the latest being Atlanta Hawks center Dwight Howard, who indicated that if he had a choice between Durant and James, he’d choose Durant.

Howard appeared on ESPN’s “First Take” on Wednesday morning and offered his analysis of the Finals before offering the reasoning behind his choice:

“KD (Durant) is seven feet. He’s doing things that no 7-footer has ever really done. That’s what sets him apart from a lot of players in this league,” Howard said. “His ability to score from anywhere on the floor. He has great handles and the thing that’s he’s doing great this year, better than any other year, he’s blocking shots, his defense is crazy this year. Those two guys, you can go with either one. I can’t really pick.”

After first indicating that he’d take himself when selecting the NBA’s best player, he was pressed to choose between James and Durant:

“I love LeBron, I love KD, but I’m gonna go with KD,” Howard said in front of a Cleveland crowd that roundly booed the choice.

In the only previous Finals meeting between James and Durant, James’ Miami Heat squad emerged victorious in 2012. After the Heat completed their 4-1 series victory over Durant’s former team, the Oklahoma City Thunder, James was named Finals MVP, the first of three times he’d win that accolade. Durant was unable to take the Thunder back to the Finals, but is the early favorite to win the series MVP award if the Warriors win two more games. However, should the Cavaliers win four of the final five clashes, James would be the likely candidate to pick up his fourth award in that category.