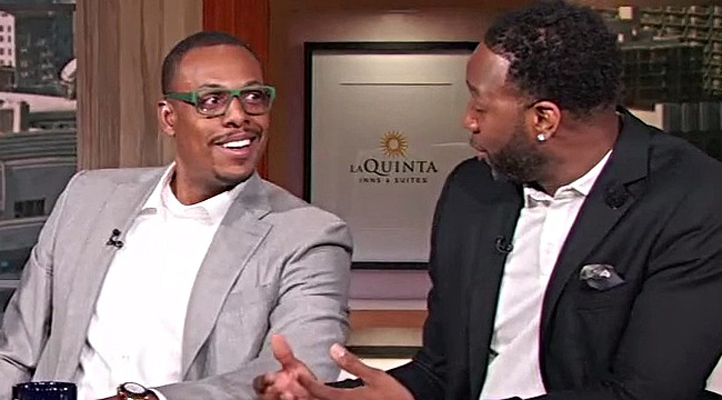 Compiling a list of the greatest NBA players ever is a subjective exercise that tends to be skewed by the attitudes of the individuals involved. For the retired duo of Paul Pierce and Tracy McGrady, that resulted in attempting to compare where Cleveland Cavaliers forward LeBron James is currently ranked among that elite list.

Pierce, McGrady and another retired star, Scottie Pippen, debated the issue on Thursday’s edition of “The Jump” on ESPN. The debate involved whether James had surpassed the accomplishments of Michael Jordan, with Pierce stating that James could still be trying to top the achievements of Magic Johnson. McGrady responded that James was a better player than Johnson, an opinion that Pippen rejected.

McGrady talked about which players would be on his all-time starting five:

That resulted in an incredulous Pierce simply saying “wow” twice before McGrady attempted to give his reasons for the selection. That only led Pierce to continue to express his shock at McGrady. After Pierce again couldn’t believe that McGrady had ranked James ahead of Johnson, McGrady was finally able to elaborate:

When McGrady indicated that Johnson wouldn’t be in that starting lineup, Pierce attempted to attribute McGrady’s age as the basis for his reasoning:

To counter that, McGrady pointed out that Pierce grew up in Los Angeles, which would explain his support for Johnson, a legendary former member of the Los Angeles Lakers.

Pierce then began to provide his all-time starting lineup, noting Johnson, Jordan, Kobe Bryant and Bill Russell, the latter name causing McGrady to once again react, who felt that Tim Duncan was worthier:

“You didn’t even see him play,” McGrady said to Pierce about Russell. “You PLAYED against Timmy D.”

Attempting explain his choice of Russell, Pierce then added his center on the hypothetical team:

“I need a balance in the lineup,” Pierce said. “My center is Kareem (Abdul-Jabbar).”

James still has plenty of mileage left in his tank to erase any further doubts about his all-time status. On Thursday night, he begins competing in his seventh consecutive NBA Finals. and will be trying to capture his fourth championship in the process.