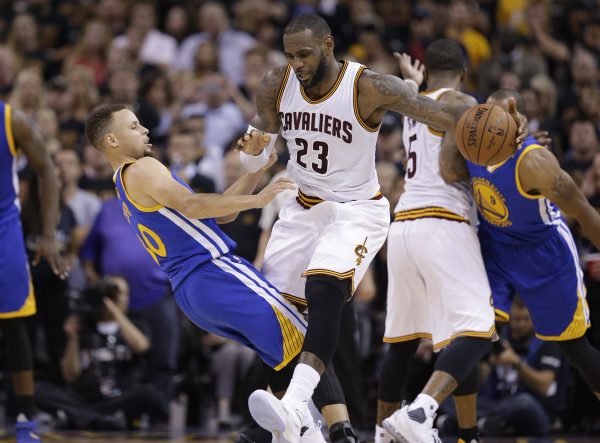 Once the Cleveland Cavaliers punched their ticket to the NBA Finals on Thursday night, they took some time to celebrate making it the promised land for a third year in a row. LeBron James has been there for every one of those previous 13 Finals contests against the Golden State Warriors, yet he wanted to wait a while before getting ready for what promises to be another stiff challenge.

That’s because James spoke during the postgame press conference about the entire process of preparing to face the Warriors, the team that’s become the Cavs’ main rival over the past three seasons.

“I’m going to be honest, I’m not in the right mind to even talk about Golden State,” James said. “It’s too stressful, and I’m not stressed right now. I’m very happy about our accomplishment. Golden State, they’ve been the best team in our league for the last three years, and then they added an MVP (Kevin Durant). That’s all I can give you right now, because I’m happy and I don’t want to be stressed.”

Two years ago, the Cavaliers entered the NBA Finals already missing Kevin Love for the remainder of the year. They subsequently lost Kyrie Irving during the overtime of Game 1 and despite James’ best efforts, the Warriors won in six games. Last year, the Cavaliers became the first NBA team ever to come back from a 3-1 deficit in the Finals, with James leading the way. That resulted in him winning MVP honors in the Finals for the third time in his career.

Cavs head coach Tyronn Lue also wanted to take some time to let the accomplishment sink in, though he indicated that he’ll quickly begin formulating a game plan to defeat the Warriors:

“To be honest, I didn’t do not one prep for Golden State yet because I really believe that this (Boston) team is a good team and I didn’t want to look too far ahead,” Lue said. “I’m very happy and I’m going to enjoy it until we play Golden State. With that being said, tonight I’ll start my prepping, and we’ll see what happens.”

James does have some experience in trying for back-to-back titles. His 2013 Miami Heat team was the last team to accomplish the feat, defeating the San Antonio Spurs in a thrilling seven-game series. He and the Cavaliers enter the Finals sporting a 12-1 postseason mark, though that’s one loss behind the Warriors’ spotless 12-0 record during the 2017 playoffs. Tipoff for Game 1 will be just after 9 p.m. ET next Thursday night, June 1.