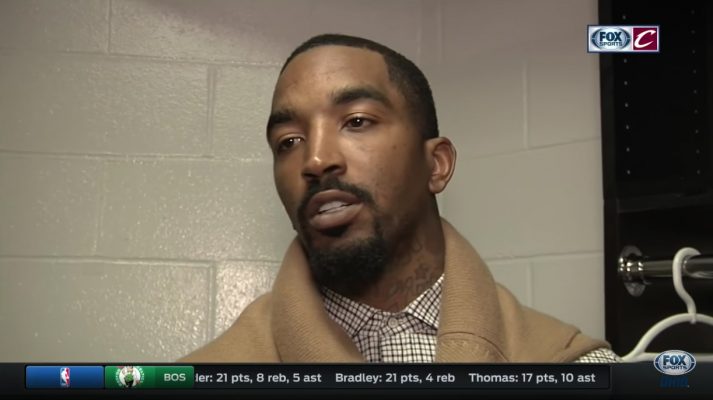 The Cleveland Cavaliers handled the Boston Celtics with relative ease in Wednesday night’s 117-104 victory in Game 1 of the Eastern Conference Finals, but Cavaliers guard J.R. Smith expects the Celtics to be more inclined to deliver some cheap shots during Friday night’s Game 2 clash in Boston.

Smith was asked (at approximately the 1:30 mark) about what the Cavs should expect in Game 2 by Fox Sports Ohio’s Fred McLeod:

“For them to come out swinging, playing scrappy like they do,” Smith said. “They’ve been playing like that all year. Whenever their backs are up against the wall, they tend to play better, just like we do. So we just got to expect that and understand there might be dirty plays, might be cheap shots coming from the other side just because they are fighting for their lives at this point. So we just got to keep doing what we’ve been doing.”

The opinion of Smith is based on the potentially desperate circumstances the Celtics are facing. Should Boston lose Game 2, they’ll have to win at least once in Cleveland to keep the series alive.

During Wednesday night’s game, the third quarter was marked by a number of contentious moments, most notably when Cavaliers center Tristan Thompson and the Celtics’ Marcus Smart had to be separated. Smart’s teammate, Isaiah Thomas, briefly joined in before Thompson and Smart were assessed double fouls

Two years ago during the first round of the postseason, Smith punched the Celtics’ Jae Crowder, which earned him a two-game suspension. The act was in retaliation for Boston’s Kelly Olynyk putting an end to Kevin Love’s season by injuring his shoulder.

Despite that history with Olynyk, LeBron James is focused on simply advancing to the NBA Finals:

“I’m not about storylines,” James said Tuesday when asked about Olynyk. “We just come to play basketball. You guys are trying to create storylines. I’m not for it. The only storyline is Celtics vs. Cavs and who is going to win this series.”

Following Friday’s contest, the two teams will play a pair of games in Cleveland on Sunday and Tuesday night.