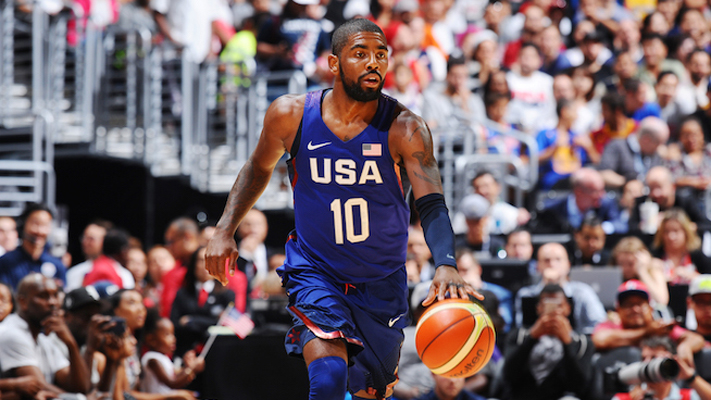 Cleveland Cavaliers guard Kyrie Irving is expected be held out of Monday night’s Olympic exhibition matchup against Nigeria due to a thigh bruise.

Sam Amico tweeted the information, noting that the Indiana Pacers’ Paul George will also sit out the contest:

Kyrie Irving has mild left thigh bruise and is not expected to play for USA tonight vs Nigeria. Paul George (calf) also out. #cavs #nba

The game will be the final tune-up before the start of Olympic play on Saturday. Given the ease with which the United States is expected to win the contest, team head coach Mike Krzyzewski sees little reason to risk the health of two key performers.

Thus far, Irving has averaged 8.5 points and 3.7 assists per game. His time has been limited simply because none of the final margins have been less than 30 points, in favor of the United States.

Entering the Olympics, Irving remains confident that Team USA will come away with its third consecutive gold medal.

“I think we just have a great mix of guys here. The oldest guy is Melo (Carmelo Anthony) and he’s just a great leader for us,” Irving said. “I have a lot of respect for a lot of guys on this team. Seeing them in this environment is different, but I just try to learn as much as possible.”