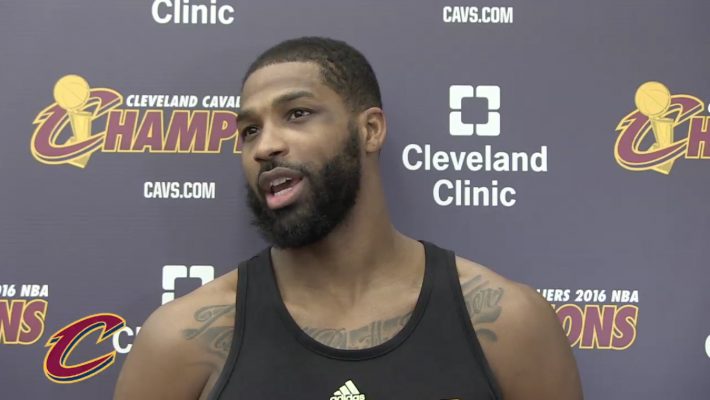 The main asset that Cleveland Cavaliers center Tristan Thompson brings to the court every game is his ability to rebound. That’s been especially evident in this postseason, with Thompson averaging 10.6 rebounds per game, helping the Cavaliers collect two consecutive sweeps.

While he may not have the art of rebounding down to a science, Thompson studies it enough to offer his approach to this facet of his game. He explained it on Wednesday following the team’s practice:

“Just watching the ball and watching where guys shoot,” Thompson said. “If a guy is shooting a shot in the corner, 70 percent of the missed shots usually come off that other side and 30 percent hits off the front rim. So just playing the percentages and kind of studying your teammates’ shots throughout the course of the game.

“For instance, a guy like Channing (Frye), if he misses a shot, he has a lot of arc on his shot so if he misses it’s probably going to be close. J.R. (Smith), his shot is not as much arc as Channing so if he misses it might be a little more long rebound. Just understanding your teammates. I’m hoping they make every shot. If not, I tell them, ‘Don’t worry, there’s a good chance I will be able to get that offensive rebound.'”

One of the reasons that Thompson has been able to dominate in this year’s postseason is that both Indiana and Toronto tried inserting small lineups during the course of their four losses. The end result essentially gave Thompson full control of the glass.

Since Thompson isn’t known for his scoring, he has to make an impact in other ways. In addition, the psychological impact of his prowess on the boards is one of the things that motivates him for every game:

“It’s the little things,” Thompson said. “That’s kind of what I bring to the table in terms of doing things that might not show up in the box score. Diving for a loose ball, or switching out on a guard and getting that big stop, cutting someone’s water off if they’ve made a couple shots.

“What I really lick my chops for is when you get the offensive rebounds at the end of the third quarter, fourth quarter. That really just sucks the life out of the opponent. You can see it in their face, especially when you’re on the road, it just takes the whole energy out of the arena. That’s what I live for.”

Both Thompson and the Cavaliers are awaiting the outcome of the Boston-Washington Eastern Conference semifinals series to see who will be their next opponent. Regardless of which team that is, Thompson’s motor remains high as the stakes get higher and he continues to live by his motto: “See ball, get ball.”