Report: Kyrie Irving Was Self-Centered, Distant, and ‘Moody’ During Time on Cavs 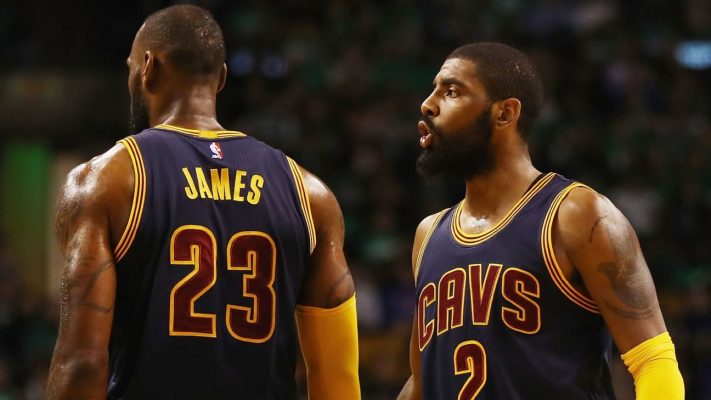 However, a new report indicates that at least some of those who worked with him in Cleveland found themselves dealing with a player who was prone to mood swings.

Howard Beck of Bleacher Report explored Irving’s mindset as he gets ready to begin his second season with the Boston Celtics, the team that acquired him last year after the guard requested a trade from the Cavs. In looking at the eight-year veteran’s entire professional career, Beck noted that Irving’s time with the Cavaliers caused some friction with his teammates:

“Irving can come across as distant, aloof. The word ‘moody’ is mentioned often among those who worked with him in Cleveland. There were reports of him disengaging with teammates for days at a time, feeding perceptions of Irving as self-centered, difficult or perhaps just uncomfortable in LeBron’s (James) orbit.”

One of those people who dealt with Irving’s personality was former Cavs assistant coach Phil Handy, who was hired prior to the start of Irving’s third season with the Cavaliers in 2013. Beck writes that one of Handy’s first duties was to work with Irving, who wasn’t immediately receptive:

“Handy tried calling the number Irving had given him. He tried texting. He tried again. Nothing. For two weeks. Frustrated, he finally took a flight to Miami, where Irving was working out, to see him in person. Which, as it happens, was what Irving wanted.

“‘He was challenging me in a sense, to see how I was gonna handle it,’ says Handy, who grew close to Irving in their four years together. ‘It wasn’t just a smooth start. This kid, he was very evasive, and he was doing it on purpose. We laugh and joke about it now, because we’re well beyond it.’

“Irving’s explanation was simple, Handy recalls: ‘I didn’t know you. I had to give you another number just to keep you at bay, just to see what you were gonna do.'”

During Irving’s final season with the Cavs during the 2016-17 season, arguments with coaches primarily dealt with his lack of assists, according to Beck:

“Witnesses recall one particularly profane exchange at a shootaround Feb. 1, 2017. That night, as if to prove a point, Irving went out and dropped 10 assists in the first half against Minnesota. He had just four in the second half.

“‘Just to stick it up everyone’s ass,’ says one Cleveland source who considers Irving a friend. ‘He can do it any time he wants to.’

“Irving sat out the next game with a sore quad, and then averaged 5.3 assists in the next four. A passive-aggressive mind game? That’s certainly how some Cavs officials viewed it.”

Dealing with Irving during his time with the Cavaliers was seemingly always an uncertainty as to which version the team would see:

“‘He can be as big an asshole as you deal with,’ the same Cleveland source says, ‘and then he can be as genuine and real and engaging. And you’ll walk away going, ‘Man, I love that M-Fer.'”

One former teammate who tried to dispel the notion of Irving’s moody behavior was veteran Mike Miller, who played with him during the 2014-15 season:

“I don’t believe it was moodiness, I just think it was trying to find himself in the midst of going from a team that won 18 games and him being The Man to a team that’s expected to win a championship. People don’t understand what expectations do.

“He just was focused on how could he get better. Is he a little bit to himself? Yeah, he does stuff different than a lot of NBA basketball players. But that’s a lot of great players in this league.”

One regular problem for Irving during his Cleveland tenure was his string of injuries, which continued last season in his first year with the Celtics. He missed the playoffs because of knee surgery, but with James no longer a member of the Cavaliers, it’s the Celtics that are expected to win the Eastern Conference title this season. Whether or not Irving’s moodiness reappears at some point remains to be seen.

boston celticscleveland cavaliersfeaturedkyrie irvinglebron jamesmike millernews tickerphil handy
← Previous Story Here’s What the Wolves Would Want From the Cavs in Exchange for Jimmy Butler
Next Story → Cavs Rumors: Cleveland Cavaliers Could Be Pulling Off Trade Today