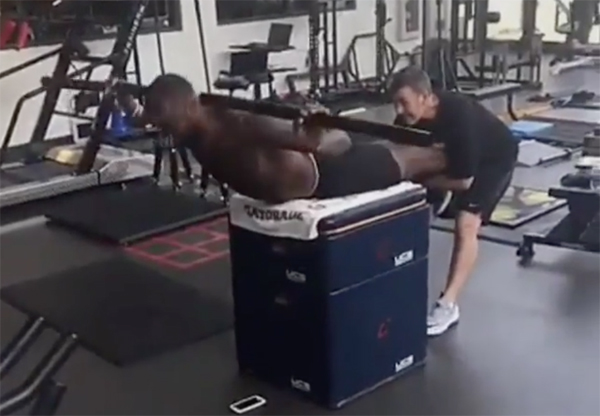 The commitment of Cleveland Cavaliers forward LeBron James to stay in top physical shape is something that’s played a part in helping him compete in six straight NBA Finals. While the payoff for that can be regularly seen on the court, actually witnessing James perform the rigorous exercises is a rarity.

However, James’ teammate Richard Jefferson captured an example of that effort in a brief video and posted the effort on his Snapchat account. Jefferson’s not even sure what he’s witnessing, which results in a blunt query to teammate Channing Frye.

The Cavaliers are currently in preparation for the Eastern Conference semifinals, which will begin next Monday night at Quicken Loans Arena. Their opponent has yet to be determined, but will either be the Toronto Raptors or Milwaukee Bucks, with the Raptors currently holding a 3-2 lead in the best-of-7 series. Play continues on Thursday night with Game 6 in Milwaukee and should the Bucks win, Game 7 will be played on Saturday in Toronto.