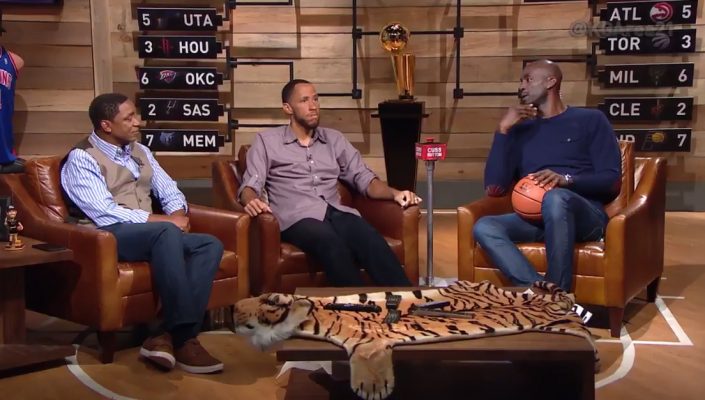 The legendary career of Cleveland Cavaliers forward LeBron James has led to continuous debates about whether or not he should be considered the greatest player in NBA history, surpassing Hall of Famer Michael Jordan. The most recent edition of this debate came on Monday night, with one of Jordan’s contemporary rivals, Isiah Thomas, offering his opinion that James deserves to be ranked at the top.

"He's got to be a basketball savant, genius, totally on another different level.." – @iamisiahthomas on LeBron James @MetroPCS #NBAPlayoffs pic.twitter.com/sj5DaqpMqn

The remarks by Thomas came during a conversation on TNT’s broadcast of Game 2 of the Cavs’ matchup against the Indiana Pacers. Speaking with Kevin Garnett and Tayshaun Prince, Thomas marveled at the consistency of James:

“We are talking about him potentially going to his seventh NBA Finals,” Thomas said. “He has dominated this era of basketball that he has played in. To be able to do it consistently, at this level, in these many places: Cleveland, Miami, back to Cleveland.”

Thomas then pinpointed the key difference as to why James deserved such a high ranking:

“So when you talk about somebody who is self-made, everything that he’s learned, he has taught himself,” Thomas said. “He hasn’t had that Bill Russell. He hasn’t had that Jo Jo White or that OG to sit down and talk. He has been the guy. Head-wise, he has got to be a basketball savant, genius, totally on another different level that arguably we haven’t seen in this league. I mean even when we talk about Jordan and Kareem Abdul-Jabbar, they had John Wooden, Pat Riley…Jordan had Dean Smith. LeBron James has no coaching tree, which is crazy.”

The comments were similar to Thomas’ remarks from last year’s NBA Finals, when he also included Kareem Abdul-Jabbar in the GOAT picture.

“When I look at it, you’re looking at LeBron James, Kareem Abdul-Jabbar, Michael Jordan. Pick either one of those three. Those are the guys, in my opinion right now, who deserve to be in that discussion,”

Critics of Thomas note that he and Jordan often feuded during their respective careers, while Thomas speaks with James by phone, offering advice. Still, of the two players, James is the only one who can still improve his numbers, which are already close to Jordan’s body of work in the NBA.

The player efficiency rating gives a clear indication of the closeness of the comparison between James and Jordan. This rating combines all of a player’s contributions into a single statistic and shows that Jordan is ranked at the top at 27.91. Right behind him is James at 27.61.

James is currently halfway to matching Jordan’s six NBA titles, and has begun the effort to win his fourth championship ring. His production level has shown no downturn, which means he figures to keep polishing his legacy in the years to come.