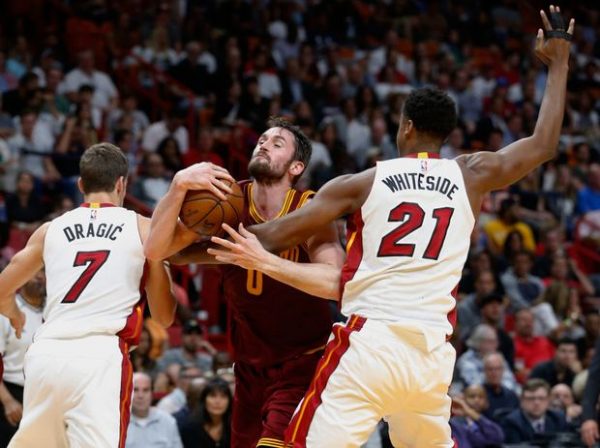 (Miami, FL) – Despite collecting two rare four-point plays in overtime, the Cleveland Cavaliers came up short during the extra session against the Miami Heat, dropping a 124-121 decision at American Airlines Arena on Monday night.

The first of those by Kevin Love sliced what had been a five-point deficit to a single point with 2:25 left in overtime, while the second by Deron Williams with 34 seconds remaining gave the Cavs their final lead at 121-120. However four free throws by the Heat’s Tyler Johnson followed and helped clinch the game for Miami.

“I thought the effort was great, even though we made some mistakes on defense and execution down the stretch,” Cleveland head coach Tyronn Lue said.

The Cavaliers were playing without both LeBron James and Kyrie Irving, both of whom were being rested after playing over 40 minutes in Sunday’s overtime loss at Atlanta. Despite that issue, the Cavs took a 91-80 lead into the final quarter of regulation, but then watched it quickly fall apart.

Miami put together a 26-8 run to start the fourth quarter, beginning with seven unanswered points in the first minute of that final quarter and tied the game at 95 with 8:46 left. It soon boosted the lead to 106-99 with 5:27 left, at which point Cleveland forged its comeback by scoring nine unanswered points to take a 108-106 lead with 1:40 left. The Heat would then tie the game, with both teams then missing chances to win it in the final 20 seconds of regulation.

Williams was outstanding in place of Irving, finishing with a season-high 35 points, nine assists and seven rebounds. Meanwhile, Love notched another double-double with 25 points and 10 rebounds. Three other players also ended the evening by scoring in double-figures: Channing Frye with 21, Kyle Korver with 18 and Iman Shumpert with 11.

“We just want the playoffs to come. We’re all kind of ready for the regular season to end,” Korver said. “We’ve shown that when we’re focused, we can play well.”

Rookie Kay Felder was expected to back up Williams, but he missed most of the second half and all of overtime with a leg injury. That forced Williams to play 46 minutes in the contest.

“It was tough on me, but it’s part of the game. Still, I was able to get into a good rhythm,” Williams said. “We’ve had some rough patches, but we’ve also had some bright spots like the Boston game. That’s what gives you hope.”

During the first six minutes of action, the two teams traded baskets that put them in a 17-all deadlock. However, for the remainder of the quarter, the Cavaliers put together a 20-7 run that gave them a 37-24 lead after one period. Two keys to that early success were the Cavs’ 71 percent shooting from the field and their 13-6 edge on the boards.

“We moved the ball well and guys came ready to play,” Love said.

That shooting touch cooled off during the final six minutes of the half as Miami bounced back from trailing 48-36 to tie the game at 54 and then again at 56. Yet Cleveland closed with two baskets to take a 60-56 lead at intermission. Keeping the pressure on the Heat, the Cavs were able to boost the lead into double-digits for much of the third quarter and took a 91-80 lead into the final period.

“He did well. He played aggressively and in running the game for us,” Lue said of Williams’ performance.

The Cavaliers will close out the regular season on Wednesday night at home against the Toronto Raptors, with tipoff set for just after 8 p.m. If they win that contest and Boston loses their final game at home against Milwaukee, they’ll notch the top seed in the Eastern Conference. Yet regardless of the outcome, the Cavs begin postseason play this weekend against a team to be determined.

“The idea of getting locked in and having that do-or-die mentality will get us going,” Love said. “We won on the road last year. We just have to treat every game like Game 7.”