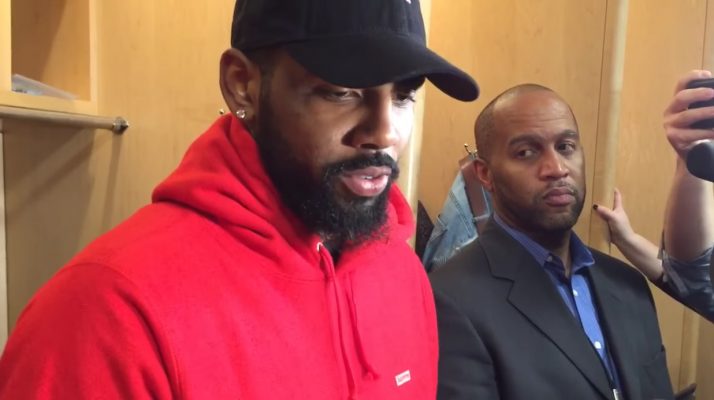 The health of Cleveland Cavaliers point guard Kyrie Irving is paramount to any chance of the Cavaliers repeating as NBA champions. That’s why Irving’s postgame comments on Friday might be causing some fans to have flashbacks of the All-Star guard’s devastating injury two years ago.

During Irving’s remarks, he spoke about the pain he felt in his left knee that underwent surgery in June 2015 after he fractured it during Game 1 of that year’s NBA Finals. That pain developed Thursday during the team’s off day.

“Thursday was a terrible day for me and my knee,” Irving said. “I mean it’s never easy, even the year after, just to realize that you have plates and screws in your knee and stuff like that.”

Irving scored 18 points and shot 8-of-13 from the field in the team’s embarrassing home loss to a depleted Atlanta Hawks team on Friday night. He briefly went to the locker room during the third quarter after limping off the court.

“I don’t want it to feel sore anymore but it’s just the realization of it,” Irving said. “I’m doing everything possible to take care of my body, I’ve got a clear conscience with that. But also understand that sometimes it’s gonna hurt. And I gotta be able to deal with it.

“So the next few days are pretty important. Tomorrow and then playing in Atlanta and Miami, and then just doing everything possible to prepare.”

A frustrated Irving spoke about not being able to deliver a top performance in the loss:

“I just did my best all of yesterday just trying to recover and do everything possible,” Irving said. “I had a great chance of playing at a high level, and then after halftime it just (expletive) flared up. Excuse my language, sorry.”

Earlier on Friday, Cavs head coach Tyronn Lue had indicated that both Irving and LeBron James would continue to play in games until the team clinches the top seed in the Eastern Conference. Irving’s pain issues could change Lue’s thinking, however:

“I don’t know,” Lue said when asked about changing his idea. “I’ve got to see how they feel. I know ‘Bron wanted this one pretty bad and he didn’t want to come out of the game. He said, ‘This is big, we need this one.’ I don’t know if guys were tired. I just know we didn’t respect those guys.”

The Cavaliers currently lead the Boston Celtics by one game with three games left in the regular season. Should the two teams finish with the same record, the Cavaliers would win the tiebreaker after winning three of the four contests between the two teams this season. They’ll travel to Atlanta for a game on Sunday afternoon before playing on Monday night in Atlanta.