Video: LeBron James Clears the Bench So Kevin Love Can Take a Seat 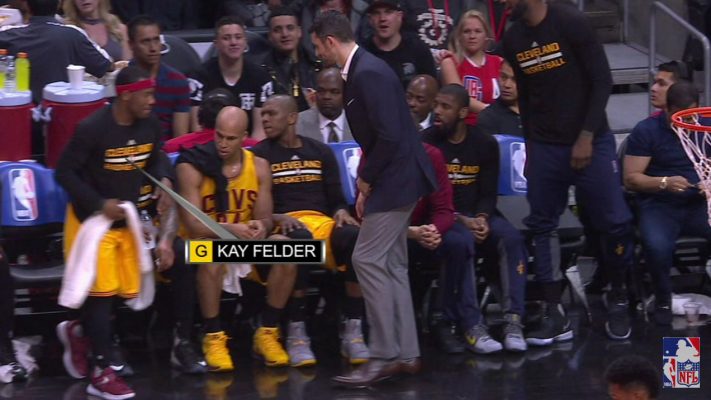 The NBA community was in an uproar yet again as the Cleveland Cavaliers coaching staff decided to rest its Big 3 of LeBron James, Kyrie Irving and Kevin Love. News was broken close to tipoff that the Cavs’ stars would not suit up on the evening, and fans who paid top dollar for their seats were left frustrated.

The Cavs understand there is a bigger picture at stake, and weren’t really fussed about the situation. The San Antonio Spurs have been doing it for years, but increased spotlight has been placed on the Cavs this season for their attempts to keep everyone fresh. One of the players not bothered by the situation was James, who sat on the end of the bench and casually sipped his coffee as his teammates battled it out on the floor.

James, who was scheduled for rest on the first night of a back-to-back might not have been playing, but he was still looking out for his teammates…well, most of them.

Early in the contest, James saw that the Cavs bench didn’t have enough seats for Love, so he bumped rookie Kay Felder off and ensured the recently injured Love could take a seat. It was unfortunate for the rookie, but it was necessary, as there was no chance the well suited Love was going to sit on the hardwood.

Looks as though King James still calls the shots even when he’s not on the floor.