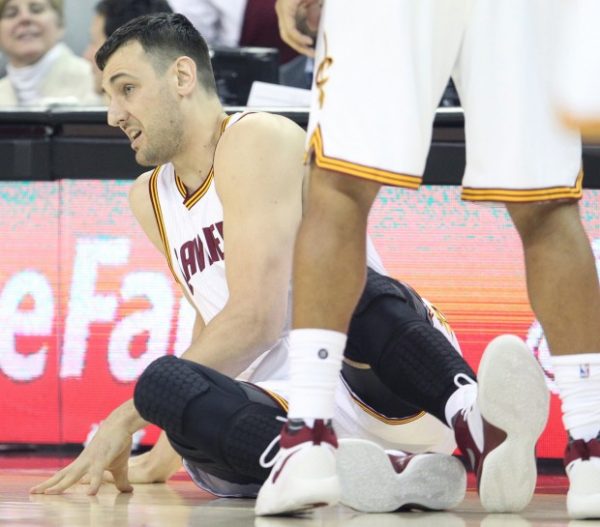 (Cleveland, OH) – For the second straight game, the Cleveland Cavaliers were unable to stop the 3-point shooting of the Miami Heat, and paid for it with another loss as they fell by a score of 106-98 at Quicken Loans Arena on Monday night.

Miami closed out the game with 16 3-pointers and took advantage of two self-inflicted wounds on the part of Cleveland, which committed 17 turnovers and missed 10 free throws. In addition, the Cavs’ defense allowed the Heat to end the game with 23 assists.

Another key factor was that LeBron James and Kyrie Irving supplied the bulk of the team’s offense and were the only Cavs players to score in double figures on the night. Irving scored 32 points and had seven rebounds and three assists, while James ended the evening with a double-double on 30 points and 17 boards, while also contributing six assists. Tristan Thompson chipped in on the glass with 13 rebounds.

“Two losses to the Miami Heat are tough, but it doesn’t mean we start questioning the guys in the locker room,” Irving said.

One noticeable absence on the bench was Cavs head coach Tyronn Lue, who missed the game due to an illness. Assistant coach Larry Drew took his place and gave some insight on how the decision was made.

“We had a conversation last night and he told me he wouldn’t be there for the shootaround,” Drew said. “Then he called me about 3:30 (p.m.) and said he just didn’t have the energy.”

The Cavaliers’ struggles all game were almost forgotten in a miracle comeback as they sliced what had been a 20-point deficit in the first minute of the fourth quarter to just five at 103-98 with 1:07 left. They then had a chance to cut the margin to two, but James’ 3-point attempt was off and the Heat’s Dion Waiters nailed his fifth 3-pointer of the night to clinch the victory with 12 seconds left to play. The furious comeback had begun with just over six minutes left and the Cavs trailing by a 101-84 score.

“I don’t think we matched their energy and I thought we were a little tired coming off our road trip,” James said.

Watching the Cavs’ performance likely didn’t help Lue’s recovery, especially when the team’s newest acquisition, Andrew Bogut, had to be helped off the court in the opening minute of the second quarter after seeing less than a minute of action. He was later found to have fractured his left tibia and very well could be out for the remainder of the year.

“When you bring a guy in, you don’t expect that to happen a minute after he comes into the game,” Drew said.”We hope the best for him.”

James had a sense of how severe the injury was when Bogut went down.

“I heard a break. I kind of knew what it was,” James said. “It took the air out of the whole building.”

Miami was in control for most of the first half, leading by as many as 15 on multiple occasions. Their main weapon was Waiters, who connected on 10-of-12 from the field for 24 points. Until that soul-crushing 3-pointer, Cleveland was able to neutralize him in the second half, forcing him to miss 10-of-11 from the field prior to his big basket.

“He got off to a phenomenal start and guys like that, you can’t let them get into a rhythm,” Drew said. “Though we did do a good job on him during the second half.”

Indicative of just how miserable things were during those opening quarters, Waiters’ four 3-pointers topped the three that the Cavaliers were able to connect on during the same stretch. The Cavs connected from long-range just once in their first eight tries, missed seven free throws and committed eight turnovers before heading to halftime with a 62-52 deficit.

During the third quarter, Cleveland seemed posed to make a comeback, chopping its deficit down to three at 69-66 with 6:31 left. However, from that point, Miami closed out the period with a 20-5 run.

“The defense was not good enough,” Drew said. “That’s two straight games that we didn’t do a good job of defending the three.”

The Cavaliers now return to the road for three consecutive games, the first of which takes place on Thursday night against their divisional foe, the Detroit Pistons. Tipoff for that game will be just after 7:30 p.m.

“We’ve got 20 games left. It’s a challenge and that excites me,” Irving said about the Cavaliers who now have a 42-20 mark on the season.