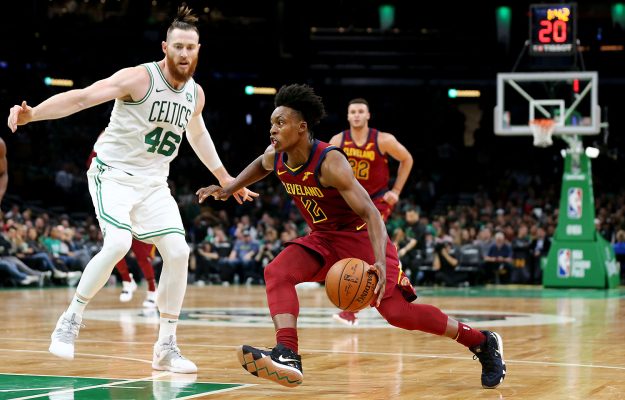 The Cleveland Cavaliers saw their first-round draft pick Collin Sexton in action for the first time on Tuesday night when they faced off against the Boston Celtics in a preseason matchup.

Sexton put in a solid performance, recording 15 points and four rebounds in 23 minutes of play. While the production is impressive, it seems what his veteran teammates are most impressed by is his character and competitiveness.

According to Joe Vardon of The Athletic, Sexton has already made quite an impression with his fellow Cavs stars.

“He has balls,” Cavs All-Star Kevin Love told The Athletic. “He’s willing to take the big shot. He’s not afraid of any matchup — in practice he’ll switch into the post against me or against Channing or somebody a lot bigger, and he won’t back down from the challenge. I love his attitude.”

Love wasn’t the only one to remark on Sexton’s competitive nature. Channing Frye broke it down in his own way as well.

“He’s a very nice guy off the court and he’s a dick on the court,” Frye said. “If you’re not on his team, he doesn’t care about your feelings. He’s trying to cut your head off.”

Considering his performance last night, and his performances earlier this summer in NBA Summer League, it seems Sexton has more than enough talent and determination to make it in this league.

With both LeBron James and Kyrie Irving no longer on the Cavs’ roster, Sexton is facing not only the pressure that comes with being a top-10 draft pick, but also the expectations to fill the void created by two All-Stars leaving over the past two summers. Sexton doesn’t seem to be worried about replacing James or Irving, however.

“He wants to be the first Collin Sexton, and that’s the right approach,” Love said.