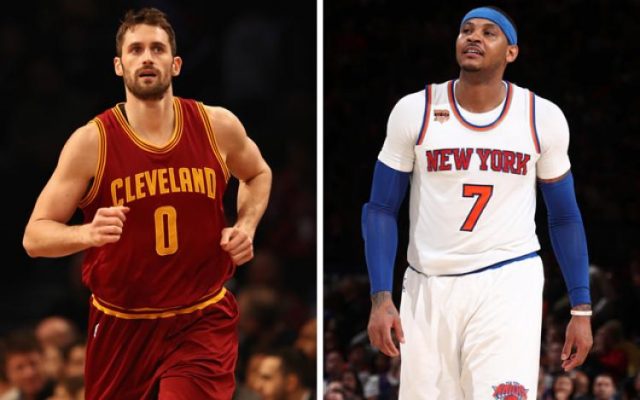 The continuing drama involving a potential trade by the Cleveland Cavaliers for New York Knicks forward Carmelo Anthony is such that a deal hasn’t completely been ruled out. However, the Cavaliers are quick to add that they aren’t interested in making Kevin Love part of any such deal and that their overall interest isn’t that high on Anthony.

Contract issues are part of the reason for Cleveland’s reluctance to deal for Anthony. In addition, not including Love would require the Cavaliers to send multiple players to the Knicks, with the Cavs already experiencing problems when it comes to roster depth.

As a result, Joe Vardon of Cleveland.com noted that the Cavs are backing away from a potential trade for Anthony:

“Multiple sources with knowledge of the Cavs’ thinking are also backing far away from a potential trade for Anthony. It doesn’t mean a deal for Anthony is entirely out of the question. Just mostly out.”

Vardon indicated that any possible deal, which he deemed as highly unlikely, had to be one that would be able to improve the team:

“The Cavs would be more likely to seek multiple, gifted role players in return for Love who could play behind LeBron James and Kyrie Irving, instead of alongside them.”

Love, having heard countless rumors about him being dealt to virtually every other NBA team since his arrival in Cleveland in 2014, had a simple response to the latest rumors:

“I expect to be here for a long time,” Love said Friday.

The 6-foot-10 power forward is expected to be back in the lineup for the Cavaliers against the Knicks on Saturday night after missing the past two games due to back spasms.