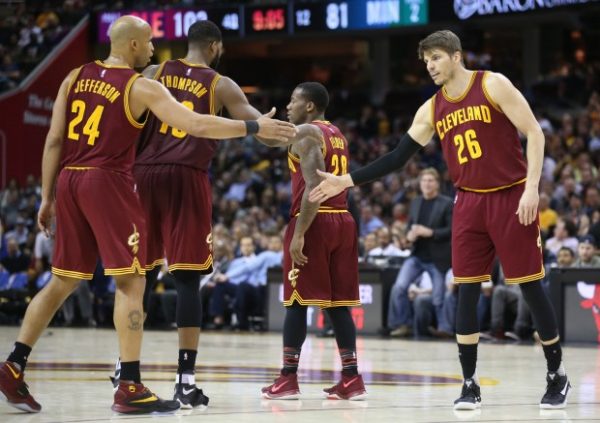 (Cleveland, OH) – Holding their opponents to 31 percent shooting from the field in the second half and getting a combined 26 assists from Kyrie Irving and LeBron James helped the Cleveland Cavaliers knock off the Minnesota Timberwolves in a 125-97 victory at Quicken Loans Arena on Wednesday night.

The Cavaliers had held just a three-point advantage entering the second half and maintained a 68-62 lead with just under 10 minutes left in the third quarter. That’s when their 22-8 surge began, allowing them to take control of the game and by the time their run had ended, the Cavs held a 90-70 lead. That advantage would eventually reach the final margin of 28, with the Cavaliers defense limiting the Timberwolves to just 37 second-half points.

“We weren’t really clean with our coverages in the first half,” Cavs head coach Tyronn Lue said. “In the second half, we did a great job of taking care of the high pick-and-roll; they had six points in the second half after 27 points in the first half. We stuck to the game plan, were able to perfect it and did it right. When we’re moving the ball and taking care of it, we’re tough to beat.”

Irving’s 14 assists broke his previous single-game record of 13, established just six weeks ago during the Dec. 21 victory over Milwaukee. It marks the eighth time this year that he’s reached double-digits in that category and the 29th time during his NBA career.

“It’s just a feel for the game, knowing where guys are going to be,” Irving said. “Guys were able to put it up right away.”

Meanwhile, James was one of three Cleveland players to collect a double-double on the night with a game-high 27 points and 12 assists of his own. For the game, the Cavs dished out a season-high 37 assists on the night.

Tristan Thompson contributed 18 points and 14 rebounds, while Irving rounded out the double-double trio by adding 14 points to his assist total. Channing Frye, starting in place of the injured Kevin Love, added 18 points, while Kyle Korver added 20 points off the bench.

“We just had to tighten up on the defense,” Frye said about the second-half shutdown. “We knew we had to keep them off the glass, out of transition and make it tough for them.”

Both teams were strong from the field during the first quarter, each finishing at 58 percent for the quarter. The Timberwolves jumped out to a quick 10-2 lead before the Cavaliers charged back with balanced scoring that was the handiwork of Irving’s first eight assists during the period.

“Our staple is on the defensive end and when we’re not playing well there, other teams take advantage of it,” Irving said.

Following a 36-32 lead at the end of the first quarter, the Cavs had boosted their advantage up to nine at 45-36. However, the Timberwolves chipped away with another 10-2 run to slice the margin to a single point. Minnesota was then able to stay close enough until intermission arrived with Cleveland holding a 63-60 lead, thanks to 55 percent shooting from the field.

“We know for long-term, we need to defend,” James said. “We had to get timely stops and we were able to do that.”

The Cavaliers now hit the road for a four-game road swing which begins Saturday night at Madison Square Garden against the New York Knicks. Tipoff for that contest will be just after 8:30 p.m., with the game being broadcast nationally on ABC.