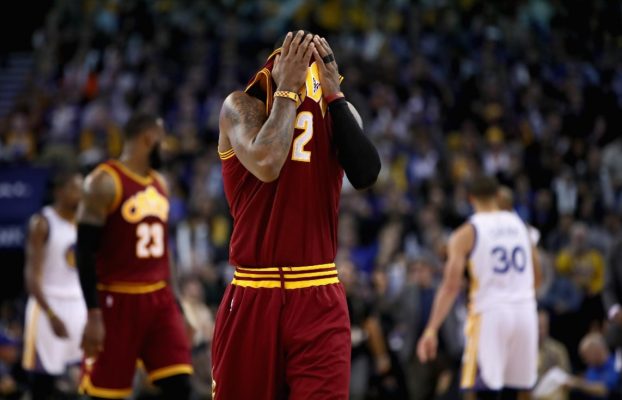 (New Orleans, LA) – Despite 35 second-half points from Kyrie Irving, a furious fourth-quarter rally fell short for the Cleveland Cavaliers, as they dropped a 124-122 decision to the New Orleans Pelicans at Smoothie King Center on Monday night.

Irving finished with 49 on the night, connecting on 15-of-28 from the field, including eight 3-pointers. He also ended the evening with a perfect 11-for-11 performance from the foul line.

“Whatever it takes, honestly,” Irving said when asked about the second-half point explosion. “Coming out of halftime, I was pretty pissed off. I’m still pissed off right now, but now that I can decompress, I made a few shots here and there, but other guys were making shots as well. Bron (LeBron James) was doing an unbelievable job of orchestrating our offense and really taking the defensive challenge. When he does that, we’re really tough to beat.”

The Cavaliers had trailed by eight to start the fourth quarter, but quickly watched the Pelicans run off nine unanswered points to give them a 103-86 lead with 10:09 left in the game. Like he had during the third quarter when he scored 17 points, Irving then led a comeback notching 18 more points and helping the Cavs to twice get within three points. However, that would be as close as they got until the waning seconds, as they fell for the fifth time in the last seven games.

“We’re going to get everybody’s best,” Cleveland head coach Tyronn Lue said. “We have to understand that.”

The loss marred another triple-double performance from LeBron James, who scored 26, handed out 12 assists and grabbed 10 rebounds. The only other players to reach double figures for Cleveland were Kevin Love, who managed a double-double of his own with 22 points and 16 boards, and Iman Shumpert, who contributed 10 points.

“We’re just not very good right now. We have to be better,” James said. “We know that whoever we’re playing, they’re going to give us their best, especially on the road.”

Poor defense during the first half put the Cavs in a huge hole, with two Pelicans players proving to be virtually unstoppable throughout the game. Terrence Jones and Jrue Holiday scored 36 and 33 points, respectively, and were especially dangerous during the first half when they each notched 22 points. New Orleans ended the first two quarters by hitting on 61 percent of its shots from the field.

“They beat us on 50-50 balls during the first half,” Irving said. “We have to bring an aggressive mindset and have to be consistent on both ends of the court.”

The Pelicans had jumped out to an early 18-7 lead, though the Cavaliers looked to be back in the game after going on 12-3 run, including eight unanswered points to close out the surge. However, New Orleans answered right back with 10 straight points and held a 35-26 lead after one quarter.

“Our defense wasn’t what it was supposed to be and that was pretty evident throughout the game,” Love said.

More sluggish play on the part of the Cavs throughout the second period helped the Pelicans maintain control of the contest. After James offered a thundering dunk with 4:12 left before halftime to make it 51-42, New Orleans blew the game open by closing out the half on a 19-8 run. That made it a 70-50 contest, once again putting Cleveland in a huge hole.

“We’ve got to be better defensively,” Lue said. “We didn’t play well or compete in the first half.”

The play of each team’s bench proved to be a major factor, with the Pelicans outscoring the Cavaliers 40-13 in that department. For the second half, the Cavs’ defense finally showed up during the third quarter, holding the Pelicans to 35 percent shooting from the field.

That allowed the Cavs’ offense to chip away at their massive deficit, though they still trailed by 15 with just over a minute left in the period. However, the Cavaliers closed out the quarter with seven points to make it an eight-point game with one period left.

The performance was especially aggravating since the Pelicans were without the services of their top player, Anthony Davis, who sat out the game with a quad contusion.

“We had set up our game plan as if he was going to play, then found out 30 minutes before the game that he wasn’t playing,” James said. “We had to switch everything because of that, but we have to be better than that.”

The Cavaliers will once again look to get back to their winning ways as they return home for a Wednesday night matchup against the Sacramento Kings. Tipoff for that contest will be just after 7 p.m. ET.