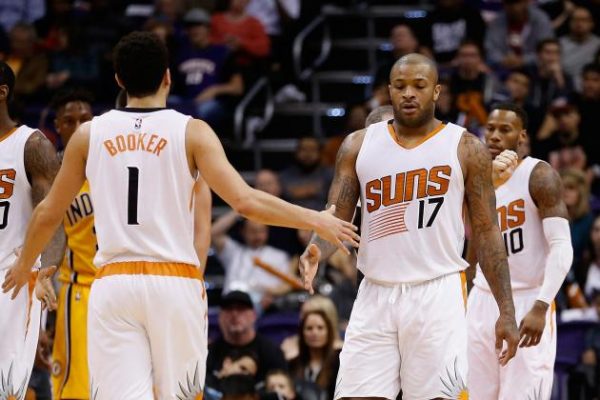 With the NBA trading deadline a little more than a month away, the Cleveland Cavaliers continue to look for available talent to fill in spots among their injury-depleted bench. One report states that they’re among a number of teams looking to acquire Phoenix Suns small forward/shooting guard P.J. Tucker.

John Gambadoro of ArizonaSports.com reports that Tucker is being sought by not only the Cavaliers, but four other teams as well. In the supposed mix are the Atlanta Hawks, Chicago Bulls, Los Angeles Clippers and Minnesota Timberwolves.

Among those other four teams, only the Clippers would presumably be considered potential title contenders, with Atlanta having dealt Kyle Korver to the Cavs two weeks ago. In addition, the 21-22 Bulls are barely clinging to the eighth playoff spot in the Eastern Conference, while the Timberwolves are far out of contention.

Tucker is 31-years-old and is set to become a free agent at the end of this season. He’s played the last five seasons with the Suns, averaging 8.0 points and 5.9 rebounds in his time there. He also has five years of international experience after playing his rookie season in 2006-07 with the Toronto Raptors.

However, offensive production isn’t Tucker’s forte, it’s his play on the defensive side of the ball which makes him valuable. He’s currently making $5.3 million, which is close to the $4.8 million trade exception that Cleveland has remaining, however it’s not enough.

In addition, the Suns are reportedly expecting to receive a player or a first-round pick in return for giving away Tucker. In the latter case, the Cavs have no first-round picks available for the near future.