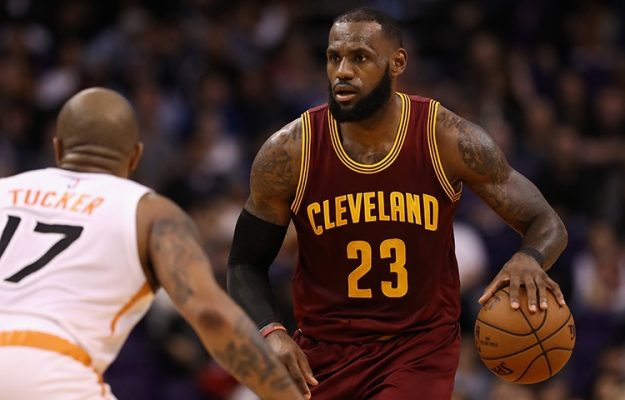 (Phoenix, AZ) – Eight points by LeBron James in the final 3:11 helped the Cleveland Cavaliers avoid a huge collapse as they held off the Phoenix Suns, 120-116, at Talking Stick Resort Arena on Sunday night.

The Cavaliers watched their once 20-point third-quarter lead completely disappear as Phoenix went on a 31-11 run that saw them twice tie the game up. A key facet of the Suns comeback was their 73 percent shooting from the field during the period.

Cleveland was able to get its lead back up to seven on two occasions in the fourth, only to see Phoenix reduce it the to two points with 4:28 left. James then connected on consecutive clutch 3-pointers, but the Suns sliced the margin to four at 118-114 with 1:15 left.

James then scored on a layup with 44.3 seconds to go, with Phoenix getting two points quickly back. After a Cavalier miss, Phoenix failed to convert and the victory was sealed.

“We’re a much better team with me on the floor, ” James said after the game. “They’re a young team and they get running on makes and misses and they took advantage of us not getting back. But we’re a team with championship composure and we were able to get it done.”

The Big 3 of James, Kyrie Irving and Kevin Love provided the bulk of the Cavs offense, combining for 80 points. James led all scorers with 28 points, adding eight rebounds and four assists. Irving was right behind him with 27 points and seven assists, while Love collected a double-double with 25 points and 10 boards.

“Turnovers, transitions. We didn’t trust the offense like we did in the first half,” Cleveland head coach Tyronn Lue said in attempting to explain the problems in the third quarter. “You can’t start playing one on one.”

Iman Shumpert and Channing Frye were the only other Cavs players to break double figures, each scoring 10 points, while Tristan Thompson narrowly missed his own double-double with eight points and 10 rebounds.

“Fortunes and momentum change on a dime and you saw that tonight,” Love said. “We made some adjustments, Bron and Kyrie made some big plays and we were able to get it done.”

The third-quarter slide uncomfortably resembled the Cavaliers’ Friday night victory in which they watched a 24-point lead nearly disappear before defeating Brooklyn.

“We play the right way and then we just mess around, ” Lue said. “We probably turned down six or seven good shots. We make those and we put the game away.”

The Cavaliers lit up the scoreboard during the first quarter, scoring 41 points on 64 percent shooting from the field. Throughout the first half, they showed an aggressive approach on both sides of the court, getting to the foul line 17 times and making 15 of those attempts and forcing 11 turnovers.

The fast pace of the Cavs gave them a 41-28 advantage after one period. With 4:35 left before intermission, they had taken their largest lead of the game at 62-40 on a Love basket. By the time the half ended, the Suns had reduced their deficit to 16 at 69-53.

“We need to take the shots when we have them,” Lue said. “We know we can be better.”

The Cavaliers now face a tough two nights of basketball as they travel to face the Utah Jazz on Tuesday night, followed by a game in Portland. The Utah game will tip off just after 9 p.m.