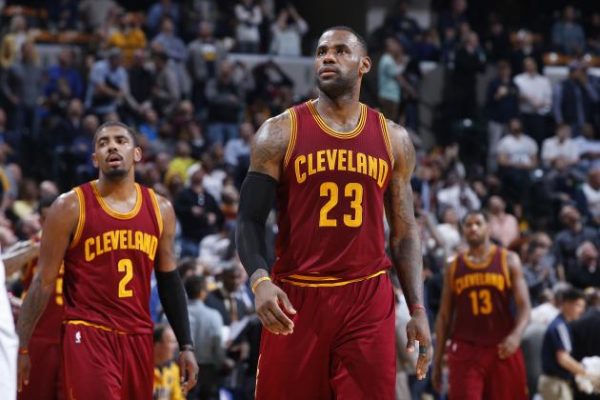 (Brooklyn, NY) – Kyrie Irving’s 16 fourth-quarter points helped the Cleveland Cavaliers hold off a furious fourth-quarter rally by the Brooklyn Nets in a 116-108 victory at Barclays Center on Friday night. The Cavaliers had entered the final 12 minutes leading 86-68, but watched their once-huge lead drop to six with just under 10 minutes left.

During the third quarter, Cleveland had held an even larger lead at 79-55 and appeared to be headed to an easy victory. That changed when Brooklyn ran off the first 12 points of the fourth quarter to make it an 86-80 game. While the Cavaliers were able to push the lead back up to double digits, they didn’t close things out until the final minute of the contest.

“The start of the fourth quarter, we didn’t get off to the start that we wanted to, to execute the plays that T-Lue (Tyronn Lue) put out there for us,” Irving said immediately after the game. “We’re going to get an earful when we go in there, but it’s just part of the game. You live and learn and it’s the start of a long road trip that we have ahead, so we’ll take the win.”

Irving and LeBron James combined for 68 points on the night, with James contributing a game-high 36 points, while narrowly missing a double-double with nine rebounds and six assists. Irving was right behind him in scoring with 32, while also dishing out four assists.

“Coming into the game, we knew that they’re a much better team at home, so we had to account for that,” James said.

“Kevin and Kyrie’s first game back, I thought they were rusty, especially early,” Lue said. “Kyrie got going in that fourth quarter, which we needed. Offensively, we turned down a lot of shots we had.”

A 15-3 run over the final 4:28 of the first half was the spark that the Cavaliers needed after a sluggish start. In the third quarter, their 10 unanswered then gave them that huge 24-point advantage.

During a good portion of that first half, the Cavaliers struggled with their shot, making just 14 of their first 39 attempts. Given its previous absence from the lineup, the duo of Irving and Love not surprisingly struggled from the field. Irving made just four of his 14 attempts during the two periods and Love was only able to connect on one of his eight attempts.

“They (missed shots) were all just misses at the rim or good-looking shots,” Irving said. “I just had to get my legs and rhythm back into it. I haven’t played in three games and that’s a load of time in the NBA. I don’t think people realize that, but that’s not an excuse.”

In addition, Thompson suffered through a brutal first half at the line by missing all nine of his free-throw attempts, though he managed to hit all four of his second-half attempts.

“It’s not always easy to keep your wind. It sets you back a little,” Love said. “Hopefully, by Phoenix, I’ll be close to, if not 100 percent.”

One player who was sharp from the outset was James, who paced the team during the first 24 minutes with 21 points. By the time halftime arrived, Irving had also broken into double figures with 10 points, with his second-quarter basket with 4:28 left giving the Cavs the lead for good, a score that broke a 35-all deadlock.

“We got some good offensive possessions, but we couldn’t make some shots,” James said. “I just wanted to push the tempo and we ended up having a double-digit lead by halftime.”

The Cavaliers now head to warmer climates for the first of five games on their West Coast road trip. The first of those contests takes place on Sunday night when they travel to Phoenix to take on the Suns in a game that will tip off just after 9 p.m. ET.