Kevin Love Calls 2016 the Best Year of His Life 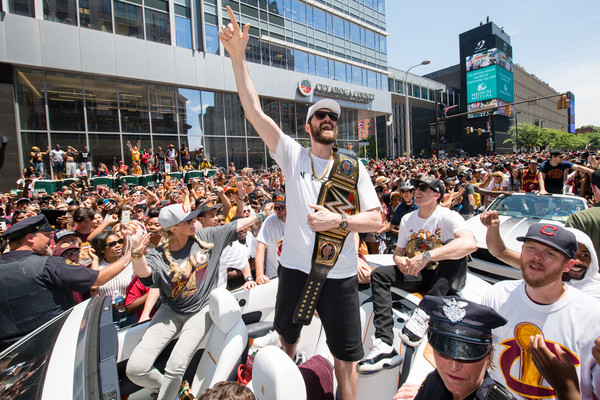 2016 has been a monumental year for the Cleveland Cavaliers. From the sudden firing of David Blatt to the superstar accession of point guard Kyrie Irving to LeBron James heightening his chances of reaching Michael Jordan to the Cavs ultimately raising a banner in Cleveland a few months ago, Cavaliers fans have witnessed a plethora of changes.

Yet, one change remains out of the limelight among all others as the new year rolls in: the reemergence of power forward Kevin Love.

Love, 28, saw his production decline heavily throughout the beginning of 2016. Averaging 16.0 points and 9.9 rebounds by the end of the 2015-16 season, the big man posted some of the lowest numbers of his career since his sophomore year in the league. However, all that changed after Love played the entire 2016 playoffs and shut down two-time MVP Stephen Curry during one of the most pivotal late-game possessions ever.

Per Dave McMenamin of ESPN.com, Love has opened up about what has helped him turn things around and get more involved with the team:

“I know how good of a player I am, even this year. It’s funny. I sit back, and I’m like, I never forgot how to play the game. It’s always been me. But I think getting that, I guess, monkey off the back or that championship off the back, so to speak, has helped everybody be a little bit more calm, and we know exactly what we want to do under Ty (Tyronn Lue).”

This season, the ninth-year forward is averaging 22.0 points, 10.9 rebounds and a career-high 1.1 steals per game, all highs as a member of the Cavs. Lue is making a conscious effort in getting the three-time All-Star engaged earlier in games and making sure he is being involved on the offensive end.

The coaching change that has allowed Lue to call the shots has also allowed Love to regain his confidence and find the right role on the Cavs:

“I think it’s confidence and just knowing,” Love said. “Because I think my first year, year and a half, I never knew when to be aggressive. Not necessarily not knowing the right play to make, but I didn’t know how to walk the walk in this offense or with this team. So, I think that evolved, and this is definitely the most comfortable I’ve been. That goes without saying.”

In addition, his 20-point, 10-rebound average ranks among just four other players in the league: Russell Westbrook, Anthony Davis, Karl-Anthony Towns and DeMarcus Cousins. The fact that Love is putting up such stellar numbers alongside two ball-dominant superstars is remarkable.

The NBA champion went as far as calling 2016 the best year of his life:

“It’s definitely a sad year in that regard,” Love said in reference to the passing of so many accomplished celebrities throughout 2016. “But for me personally, it was the best year of my life. 2016 was a great year for me.”

There’s no doubt 2016 was a phenomenal year for the 6’10” power forward. After helping his team win a title and becoming a prolific 20-10 player again, Love has catapulted himself into superstar territory and looks to be an inevitable selection in the 2017 All-Star Game come February.