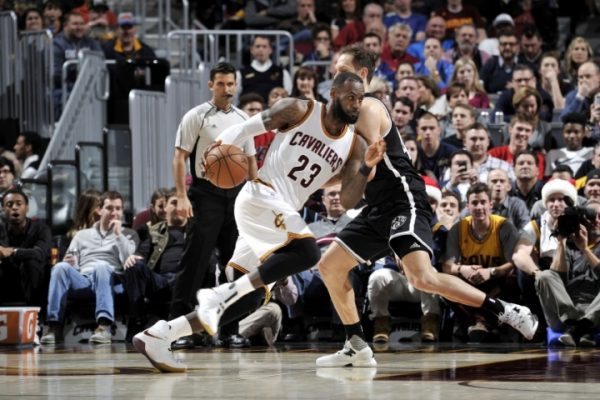 (Cleveland, OH) – Complete domination over the first three quarters helped the Cleveland Cavaliers build up as much as a 46-point lead and coast to an easy 119-99 victory over the Brooklyn Nets at Quicken Loans Arena on Friday night.

The Nets held a 10-9 lead with 6:30 to play in the opening quarter, but eight unanswered points by the Cavs began an onslaught that continued over those three periods. By the end of the first quarter, Cleveland held a 29-15 advantage.

After the Nets reduced the margin to 12 at 34-22 with 10:16 left before halftime, the Cavs ended any thought of a comeback with a 28-11 surge over the next eight minutes. Though five different players had at least four points during that run, veteran reserve Mike Dunleavy led the group with seven points.

Not letting their foot off the gas after the break, Cleveland limited Brooklyn to 17 points in the third quarter while progressively building up its lead. Channing Frye’s dunk with 1:13 left made it 97-51 before the Cavs took a 98-57 lead into the final quarter of garbage time.

“It’s just next man up mentality right now,” Kevin Love said immediately after the game. “We know moving forward that we can’t make any excuses. If we lock into our game plan, then we’re a very good team.”

During those first three quarters, the Cavaliers held a 46-30 advantage on the boards, dished out 24 assists and forced the Nets into 16 turnovers.

The blowout nature of the victory allowed Lue to rest his starting unit for the entire fourth quarter after a grueling back-to-back versus Milwaukee earlier in the week. None of his starters played more than 27 minutes, which figures to benefit them with a huge game on tap for Sunday against Golden State. Many of the postgame questions focused on that contest, rather than the victory over the Nets.

“For us, it’s the next game in the process. They’re a well-oiled machine and a great team,” LeBron James said. “We’ll be ready for the game, but we lost a starting guard for four months. We don’t have that sense of entitlement that we’re going to meet them in the finals again.”

James led the Cavs with 19 points, six assists and five rebounds. While three other members of the starting unit ended up with double-doubles on the night: Tristan Thompson scored 16 and grabbed 11 rebounds; Love had 14 points and 15 rebounds; and Kyrie Irving finished with 13 points and 10 assists.

Dunleavy, Frye and rookie Kay Felder made it seven Cleveland players to score in double figures, with Dunleavy notching 14, Frye with 12 and Felder with 11 on the night.

“He (Dunleavy) had a good first half, it was great to see him be comfortable on the floor,” Cavs head coach Tyronn Lue said. “We ran a couple of sets for him. I thought we moved the ball well.”

Love made his return to the lineup after sitting out the past two games after suffering a knee contusion in the team’s win over the Los Angeles Lakers.

“The knee feels good, I feel healthy, but I was gassed,” Love said. “Especially that first quarter and first half, I put up some shots that were a little short.”

The Christmas Day tipoff will take place just after 2:30 p.m. ET at Quicken Loans Arena and will be nationally televised on ABC.

“All the games are important, but it’s a great challenge,” Lue said. “It’s definitely a rivalry, but there’s a long way to go until the end. It’s not easy to get there.”