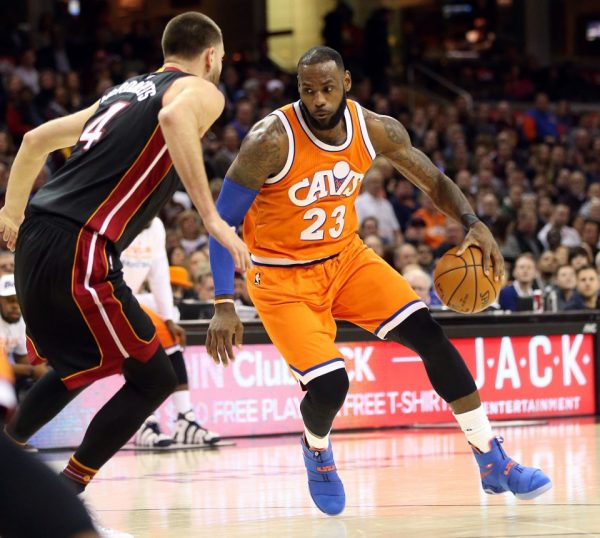 (Cleveland, OH) – Another strong night by the Cleveland Cavaliers’ Big 3 accounted for 78 points and helped put away the Miami Heat in an easy 114-84 victory at Quicken Loans Arena on Friday night.

For the third consecutive game, the Cavaliers put together a strong third quarter, shooting 57 percent from the field, as the trio of LeBron James, Kevin Love and Kyrie Irving actually outscored the Heat, 28-23, during the period. The victory was Cleveland’s third straight and improved its record to 16-5 on the year.

“We’re paying attention to detail and sticking to the game plan,” Irving said.

Defense also played a key role in the win, with the Cavaliers holding the Heat to just 35 percent from the field on the night. The effort over the final three quarters was especially stifling, with Miami hitting on just 31 percent of their shots during this stretch.

“We wanted to execute and gets stops and we were able to do that,” James said.

Love led all scorers with 28 points and added another double-double by grabbing 15 rebounds. Meanwhile, James had another solid all-around game, scoring 27 points, handing out eight assists and corralling eight boards, with Irving tossing in 23 points, shooting 9-of-15 from the field.

“Coming into this season, the trust factor was there,” Irving said speaking about the Big 3. “We don’t have the miscues and that’s a sign that we’re maturing.”

Though he only scored five points on the night, DeAndre Liggins put together an outstanding defensive performance in his second straight start, including three blocked shots on the evening.

“I bring a defensive mindset. It started at Kentucky and ever since then, I carried it,” Liggins said. “They don’t need my offense.”

James’ scoring performance was good enough to elevate him one notch higher among the NBA’s all-time scoring list, passing Elvin Hayes for ninth place. With 27,315 career points, James is just 94 points behind Moses Malone to take over the eighth spot.

“He takes what the defense gives him,” Cleveland head coach Tyronn Lue said about James.

In addition, James, Irving and Love scored 20 or more points in the same game for the third consecutive night, becoming the first Cavs trio to accomplish that feat in 44 years. After the game, James was asked what it takes to accomplish that type of feat.

“It’s a consistency. Guys knowing their role and knowing what to expect out of one another and where’re we’re going to be on any given night,” James said. “We’re in a great groove right now, myself, Kev and Kyrie, and we want to continue that tomorrow night.”

For the first nine minutes of the opening quarter, the two teams traded a number of leads before the Cavaliers finished strong in those last three minutes. Scoring eight of the last 10 points of the period, they held a 31-27 lead, with Love once again posting a strong first quarter with 13 points.

“They got some layups, but we stayed with it,” Lue said. “I was pleased with our blitzes and our one-on-one defense.”

In the second, Cleveland held four different leads of 10 points and then headed to the locker room with a 57-46 lead on a 3-pointer by Irving with seven seconds left. During the quarter, they hit on four 3-pointers after being blanked in that category in the first period. The Heat never got the margin below double-digits the remainder of the game.

While the Heat continue to be plagued by injuries, the Cavs were also without two of their key players. J.R. Smith missed his second consecutive game as he continues to rehab a knee injury suffered in Monday night’s win at Toronto. Also, Channing Frye was unavailable due to personal reasons.

The Cavaliers don’t have much time to rest, with another home game set for Saturday night. That 7:30 p.m. clash will be against the Charlotte Hornets.