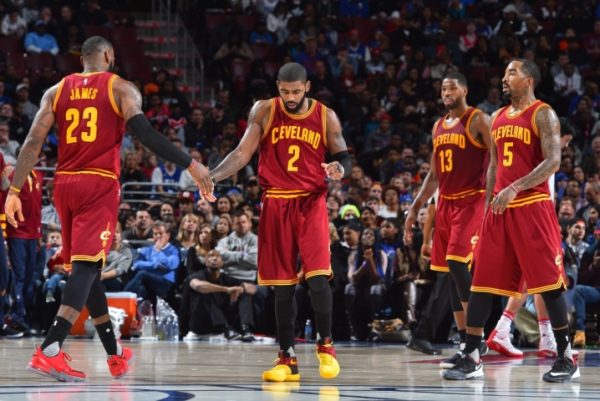 (Philadelphia, PA) – Kyrie Irving’s 19 fourth quarter points sparked a 26-11 run as the Cleveland Cavaliers came back in the final period to defeat the upset-minded Philadelphia 76ers, 108-104, at Wells Fargo Center on Sunday afternoon.

Cleveland had trailed for the entire game until Irving’s driving layup with 9:22 remaining gave them their first lead of the contest. The Cavaliers would eventually lead by as many as 11 until the Sixers whittled the final margin down to four. Irving’s basket came in the early stages of the surge and was just a small sample of his production on the afternoon.

The sixth-year guard ended the day with 39 points to lead all scorers, combining with the other members of the Big 3 to score 90 of the team’s 108 points. LeBron James notched his 45th regular-season triple-double with 26 points, 13 assists and 10 rebounds. Meanwhile, Kevin Love added a double-double with 25 points and 11 rebounds.

“Kyrie being aggressive, score the basketball, do what you do. He had 39 points, LeBron had 13 assists,” Cleveland head coach Tyronn Lue said of two members of the Big 3. “We played off those guys. Kevin had 25 and 11. They had 90 of their 112 points and that’s why they get paid the big bucks.”

Not to be outdone when it comes to double-doubles, Tristan Thompson chipped in with 12 points while also grabbing 12 boards. One unsung performance was provided by rarely-used veteran James Jones, who connected on a pair of clutch 3-pointers in the third quarter to keep the Cavs close.

“We trusted each other with the pass since a lot of open looks didn’t go down tonight,” Irving said immediately after the game. “But we stayed consistent, stayed within the game plan, executed down the stretch and that’s what it’s all about.”

One down note was the continued shooting struggles of J.R. Smith, who missed all 11 of his field goal attempts after a 1-for-10 performance on Friday night.

Frigid shooting put the Cavaliers in a first-half bind, connecting at just a 26 percent clip during the first quarter. That allowed the Sixers to take a pair of 10-point leads before Cleveland managed to chop the deficit down to six at 30-24 by the end of the period.

The outside shooting didn’t improve much during the first seven minutes of the second quarter, with the Cavaliers managing to hit on only 29 percent of their shots. That allowed Philadelphia to take its largest lead of the game at 47-33 with 5:47 left before halftime.

At that point, James began the charge back by connecting for his 1,000th 3-pointer in a Cleveland uniform. That sparked a 10-2 run, though the 76ers answered with seven straight points to boost their lead back up to 13 points at 56-43. The Cavs responded with a 9-2 run to head to halftime only trailing 58-52, thanks to the 55 percent outside-shooting stretch that began with James’ 3-point shot.

Following the break, Cleveland had a chance to make it a one possession game, but the Sixers ended up scoring six of the next eight points to give them a 72-64 advantage with five minutes left in the period. That lead was boosted to 10 at 81-71 with 1:15 left, but six straight points by the Cavaliers made it a four-point game with 12 minutes left.

“We didn’t get off to a good start, we were battling back the whole entire game,” Irving said. “Coming into the fourth quarter, we knew we had to dial in. That’s money time.”

The Cavs were playing without two key reserves, with Iman Shumpert sitting out the game with a left hamstring issue and Channing Frye missing his second-straight contest after the death of his father.

Cleveland returns to action on Tuesday night when it travels to Milwaukee to face the Bucks in a game that will tip off just after 8 p.m. ET.