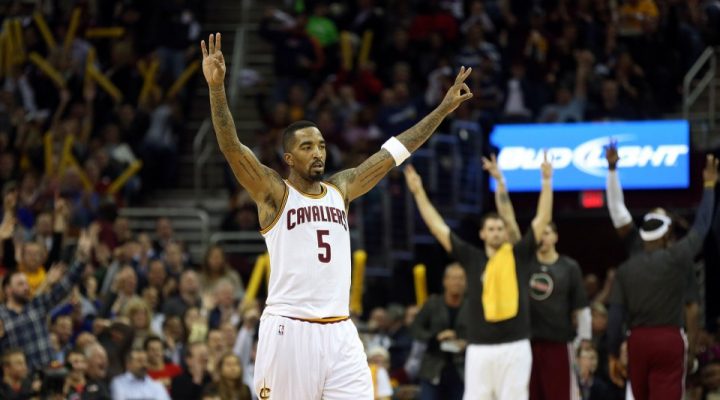 (Cleveland, OH) – The clutch three-point shooting of J.R. Smith down the stretch helped the Cleveland Cavaliers avoid a disastrous collapse as they improved to 3-0 on the season with a 105-99 victory over the winless Orlando Magic at Quicken Loans Arena on Saturday night.

Smith hit a pair of three-pointers within 45 seconds to seemingly give the Cavaliers enough of a cushion at 94-88 with 2:46 remaining; while LeBron James’ five subsequent points made it 98-91 Cleveland with 1:21 left. Still, Orlando again chopped the lead to three with 50.1 seconds to go until another Smith three with 31.5 seconds remaining put the game away.

The Cavaliers had led by as many as 22 during the first half and 18 at the end of the third quarter, but 31 percent shooting throughout the second half resulted in those tense moments down the stretch.

Cleveland head coach Tyronn Lue didn’t try and use the fact that the team playing was playing the second game in as many nights, especially since the Magic were facing the same situation.

“I thought we messed around with the game and took some bad shots,” Lue said. “Defensively, we weren’t good tonight, but we let our guard down.”

Echoing Lue’s remarks, Smith spoke about the need to get better:

“To be a championship team, we can’t let a team like this stay in the game,” Smith said. “We have to be better than that.”

Smith and James were part of a quartet of Cavs players that managed to combine for 78 of the team’s 105 points. James led the group with 23 points, nine assists and six rebounds. Kyrie Irving scored 20 and added four boards, while Kevin Love’s 19 points and five rebounds were joined by Smith’s 16 points and five boards. For good measure, Tristan Thompson hauled down 12 rebounds.

During the game, James broke another franchise record when he passed Brad Daugherty for career defensive rebounds.

“You see Brad’s name in the record book a lot,” James said. “I’m just blessed to put my name in that history.”

The shooting struggles began at the start of the second half, with the Cavaliers holding a 62-45 advantage. During the third quarter, Cleveland managed to connect on just 22 percent of their field-goal attempts, while the Magic weren’t much better, hitting at a 33 percent rate.

Indicative of the frigid shooting during that quarter was the fact that the two teams combined to miss all 13 of their three-point attempts. Despite both teams having their struggles, the Cavs actually boosted their lead over the period by a point.

James spoke about the need for some players to just put the ball up instead of passing it to a teammate:

“Sometimes, we’re too unselfish,” James said. “When guys have looks, they have to take them.”

Early on, it looked like it would be an easy night for the Cavaliers. The Magic held a trio of early leads in the first two minutes of action, but a James three-point play started the Cavaliers on a trajectory that would keep them in the lead for the remainder of the game. Love’s jumper from the right corner with seven seconds left in the first quarter, followed by a Kay Felder layup at the buzzer gave the Cavs a 33-20 advantage after one period.

After the game, Love talked about the team’s inconsistent performance:

“We were a little complacent at what we were doing,” Love said. “We’re usually good at putting teams away, but we didn’t do that tonight.”

The Cavaliers will remain at home for their next two contests, facing the Houston Rockets in a 7 p.m. matchup on Tuesday night, followed by an 8 p.m. clash against the Boston Celtics on Thursday.