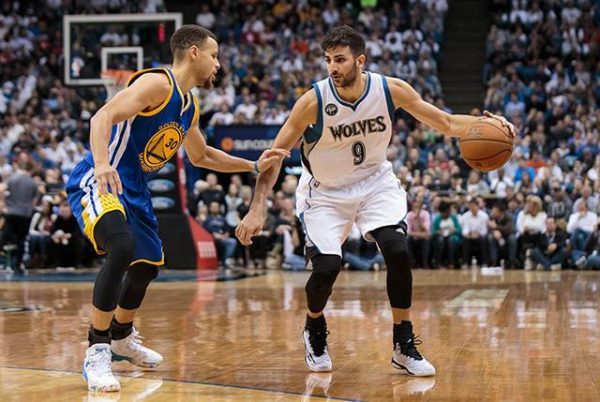 With the Cleveland Cavaliers currently facing uncertainty when it comes to their backcourt, the idea of trading for a guard has been suggested by some in the media. Veteran guard Mo Williams has hinted at retirement, though the more important issue for the Cavaliers is making sure that free agent shooting guard J.R. Smith is re-signed.

One name that’s been tossed out for fans to consider is Minnesota Timberwolves point guard Ricky Rubio, who’s been frustrated by the team’s continual struggles. Add to that fact that the team has a new head coach in Tom Thibodeau and used the fifth pick in the 2016 draft to select point guard Kris Dunn out of Providence College. That means that it’s not out of the realm of possibility that Rubio could be headed elsewhere.

Per Jamyson Frierson of Hoops Hype:

“Ricky Rubio would be the perfect complement to Irving and fit for the Cavaliers.

“With Zach LaVine and Kris Dunn as the future at point guard for the Minnesota Timberwolves, Rubio is likely an available asset. He’s mentioned in the past how he’s wanted out of Minnesota and to play in a bigger market.

“He even talked to a Spanish radio station known as Catalunya Radio about possibly leaving the Timberwolves if they miss the playoffs this upcoming season.

“Some might say that those are character issues, but when a player is drafted to a struggling franchise that hasn’t been to the playoffs since 2004, and with little progression, it’s tough for them to be optimistic and want to stay with the team long term.

“Rubio would finally have a chance to play for a championship if he were traded to the Cavs. His overall scoring is still a work in progress, but his passing ability is close to being elite.”

The problem for the Cavs in this scenario is that Rubio has three years remaining on a deal that will pay him an average of $14 million a year. To accommodate that sort of contract, Cleveland would likely have to unload Iman Shumpert, Williams and a future first-round pick to fit under the NBA salary cap. Shumpert is only a few months older than Rubio and also has three years left on his $40 million deal that was signed last season.

Even if that ends up being arranged, Rubio’s career has been spent at point guard, which is already in the capable hands of Kyrie Irving. Plus, dealing away both Shumpert and Williams, coupled with the potential absence or loss of Smith also thrown into the mix, could potentially leave a gaping hole in that area.

Rubio’s defensive stats would likely come close to Shumpert’s past production after the point guard led the NBA in steals in 2013-14 and finishing third in that department in 2015-16. On the offensive side of the ledger, Rubio has averaged 10.1 points per game for his career, compared to Shumpert’s 7.4, though Shumpert has a bit of an edge when it comes to shooting percentage.

Unfortunately, another similarity the two players share is having a problem staying healthy. Shumpert’s injury history is well known by Cavs fans, but Rubio also has a checkered career. Towards the end of his rookie season in 2011-12 and at the start of his second campaign, he had to rehabilitate a torn ACL in his left knee. Then, plagued by a severe ankle injury in 2014-15, he was limited to just 22 games.

Rubio was reportedly destined for either Sacramento, until the Kings signed Ty Lawson, or San Antonio, where the team would be looking to the post-Tony Parker era. Depending on how strong the Spurs’ purported interest is in Rubio, the Timberwolves may conceivably try and squeeze the Cavaliers (or Spurs) for additional talent — like they did in the early stages of the Kevin Love trade negotiations.

One off-the-court dynamic that Cavaliers general manager David Griffin also has to consider is the chemistry issue. Shumpert already has a bond with his teammates, while Rubio would either need to adjust to a new position or see his playing time be reduced, something that isn’t always conducive to creating a happy player. It’s likely that this option won’t even be considered until the Smith contract situation is settled, one way or the another.