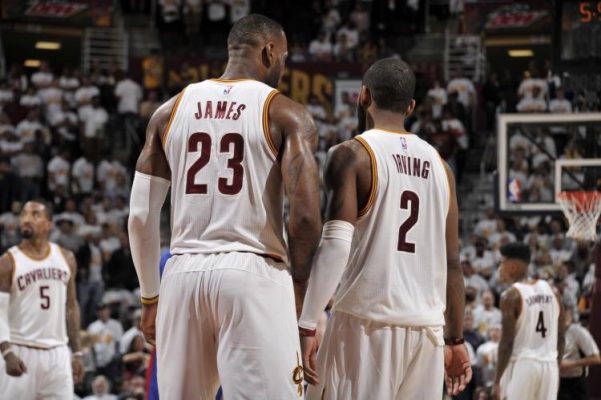 Two years ago LeBron James shocked the world and announced his return to the Cleveland Cavaliers. In announcing his return, he declared a few things through a very emotional letter.

Among the declarations, working to win a title headlined them all. As much exertion as it took, The King delivered his promise on June 19 and brought a championship to Northeast Ohio.

The ultimate goal of winning that championship was carried out and James’ prophetic words to get the organization there will always highlight that glorious letter. However, it doesn’t mean what other things James promised should go unseen.

One part that gets overlooked is the four-time MVP’s promise to make fellow teammate Kyrie Irving better:

“I see myself as a mentor now and I’m excited to lead some of these talented young guys. I think I can help Kyrie Irving become one of the best point guards in our league.”

Just like James spearheaded the Cavs’ sole championship run, he fulfilled his promise in making Irving one of the best point guards in the league.

Before James arrived, the first pick in the 2011 NBA Draft struggled to be the star the Cavs expected him to be. Despite winning Rookie of the Year, Irving never led his team to the playoffs nor got them to a .500 record in the first three seasons of his career.

The two have had slight chemistry issues over the past couple of years, but they eventually made it work en route to the ultimate goal. And although James is the clear leader on the team, he has allowed Irving to find his niche and contribute as star.

Not many other players at James’ level could step back the way he did in the the 2016 NBA Playoffs. Perhaps the shining moment in this partnership was Game 7 of the NBA Finals. With the biggest game in franchise history tied with under a minute to play, James didn’t demand the ball or tell everyone to get out of his way so that he could own the moment.

Instead, he confidently let his co-star do his thing. In fact, as Irving dribbled the ball around, James told Richard Jefferson to get out of Irving’s way so that he could have open space. The result turned out to be one of the best game winners in the NBA history. It propelled the Cavs to win their first championship and put Irving on a different realm of stardom.

Since then, people have looked at the 24-year-old differently. James’ arrival in Cleveland has granted Irving some big-time playoff moments, all opportunities that have enhanced the guard’s play and let everyone see what he’s capable of doing. Had James not been in town, Irving might have been just another talented point guard on a non-producing team.

Now, the five-year veteran has a championship and gold medal under his belt in addition to a variety of other accomplishments. He isn’t considered just another good point guard in the league.

James has done a lot for Cleveland in his two years since returning but elevating Irving from a good point guard to one of the best point guards in the league will be priceless. The 31-year-old didn’t just make the Cavs temporarily successful but he’s set them up for long-term success by raising Irving’s game and confidence.

It’s safe to say that this team will be in good hands for a very long time.