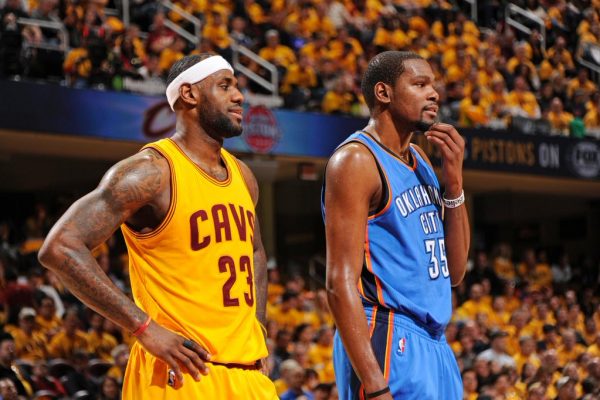 The countdown has begun.

No sooner did Kevin Durant finish leading the United States men’s basketball squad to a 99-66 drubbing of Serbia in the Rio Olympics on Sunday than the conversation turned from gold medals to the Golden State Warriors. With Durant having joined a team which set an NBA regular-season record last season with 73 victories, it’s being looked at as a foregone conclusion that the Warriors and Cleveland Cavaliers will meet in the NBA Finals for a third consecutive year.

For those interested in such matters, we’ve passed the halfway point between when LeBron James and the Cavs ended the city’s 52-year major-league pro sports championship drought and when the title banner will be raised at Quicken Loans Arena. That could also be the same night when the Cleveland Indians host Game 1 of the World Series next door to the Q, but let’s focus on just one team.

As crazy as it might sound to a fan base which went starving for a winner for so long, the Cavs haven’t exactly basked in the afterglow of national media coverage this summer. When Durant decided to bolt the Oklahoma City Thunder and team up with Stephen Curry, Klay Thompson and Draymond Green, the Warriors went back to being the top story in a number of outlets.

LeBron hasn’t gone into seclusion by any stretch. He distinguished himself last month at the ESPYs and followed that up with a substantive interview on The Daily Show which had little to do with basketball.

And in a wide-ranging question-and-answer session with Business Insider, he went so far as to describe Durant’s move as “all great for our league.”

Why in the world would LeBron say such a thing?

Both Durant and Curry will be 28 when the season starts, meaning they should be entering their peak years. James turns 32 in December and can start to see the end of his amazing journey, which largely accounted for his heartfelt and sincere reaction in the moments after the Cavs overcame a 3-1 series deficit to stun the Warriors.

That triumph should have cemented LeBron’s legacy. Being the competitor he is, however, there are new worlds to conquer. And conquering what looks on paper like an other-worldly team might be his greatest feat yet.

Durant joining the Warriors is different from the LeBron of 2010 coming to a Miami Heat team which went only 47-35 the season before and lost in the first round of the playoffs to the Boston Celtics. If you go back another generation, this is more comparable to Moses Malone being acquired by the Philadelphia 76ers in the hopes that both he and Julius Erving would get the championship ring which had eluded them throughout their careers.

For that first season, the Sixers’ plan worked like a charm. But in hindsight, it was merely a one-year blip in a decade dominated by Larry Bird’s Celtics and Magic Johnson’s Los Angeles Lakers.

As has been pointed out, LeBron has almost nothing to lose at this stage. If Durant and the Warriors avenge what took place against the Cavs in June, it’s what they were supposed to do. If LeBron gets the same sort of help and then some from Kyrie Irving, Kevin Love, Tristan Thompson, J.R. Smith and the rest of his teammates, he’ll achieve Jordan-like or Magic-like legendary status.

He can envision a legacy defined by not being satisfied and by not backing down from perhaps his most formidable challenge yet.