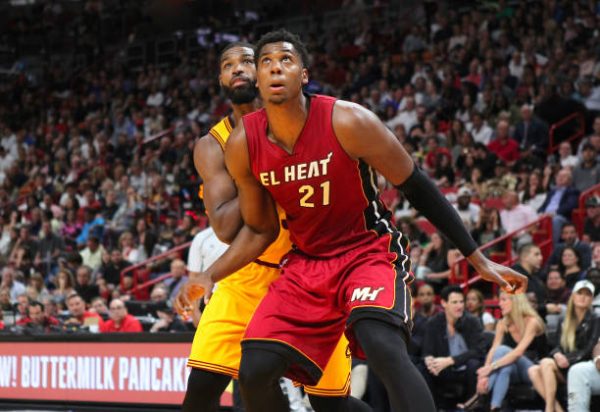 On Wednesday, a rumor regarding a potential deal between the Cleveland Cavaliers and Miami Heat began making its rounds across the internet.

The initial report indicated that the deal being discussed involved the Cavaliers sending Tristan Thompson and Kyle Korver to Miami in return for Heat big man Hassan Whiteside.

According to a more recent report, the deal being discussed involves quite a few more players.

Report: The @cavs and @MiamiHEAT are discussing a deal that would send center Hassan Whiteside (@youngwhiteside) and 1 of Dion Waiters (@dionwaiters3) or James Johnson to ClE in exchange for Tristan Thompson (@RealTristan13), Jordan Clarkson (@JordanClarksons) & K. Korver to MIA.

While none of the players involved in the deal can truly be considered stars, there is no doubt a lot of talent on both sides.

Though Whiteside had a disappointing season last year and dealt with several nagging injuries, he still managed to average 14.0 points and 11.4 rebounds per game. Dion Waiters, who is currently working to come back from an ankle injury that cut his 2017-18 season to just 30 games, will have a lot to prove this upcoming season and could supply much-needed offensive acumen. As for James Johnson, he would add a hard-nosed approached to basketball that the Cavs have seemed to lack in recent seasons.

It would be hard to say goodbye to Thompson, Korver, and Jordan Clarkson, but a trade like this would certainly prove that the Cavs are committed to remaining relevant in the Eastern Conference.

While this report is still little more than a whisper, it is certainly gaining steam. Time will tell whether that is an indication of truth.