LeBron James Reveals Motivation for Rest of Career: ‘My Motivation Is This Ghost I’m Chasing’ 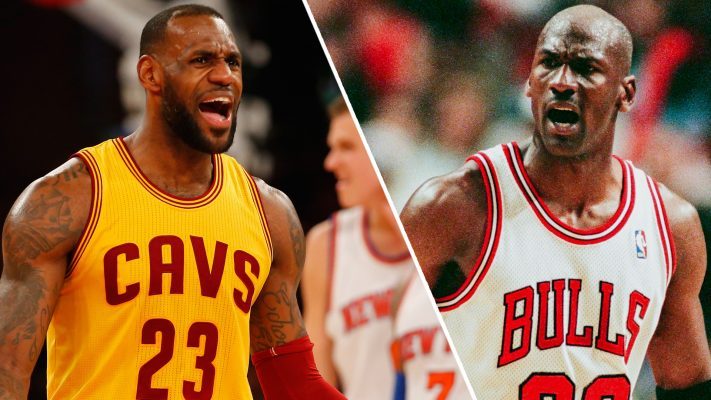 Even after achieving his stated goal of capturing an NBA title for the Cleveland Cavaliers, LeBron James remains motivated to bring home more championships, with Michael Jordan’s legacy the driving force of that push.

James spoke to Sports Illustrated for the cover story of this week’s issue and indicated that despite that pressure being alleviated, he’s still drawn to the allure of becoming the greatest player ever—specifically referencing Jordan.

“My motivation is this ghost I’m chasing. The ghost played in Chicago. My career is totally different than Michael Jordan’s. What I’ve gone through is totally different than what he went through. What he did was unbelievable, and I watched it unfold,” James said. “I looked up to him so much. I think it’s cool to put myself in position to be one of those great players, but if I can ever put myself in position to be the greatest player, that would be something extraordinary.”

James is presently at the halfway point of matching Jordan’s six NBA titles, but has grown into a leadership role that became quite evident after the Cavs fells behind 3-1 during the last year’s NBA Finals. Despite knowing that no team had ever come back from such a deficit, James sent a late-night text to his teammates.

Aided by that motivation and the one-game suspension of Golden State’s Draymond Green, the Cavaliers won their next two games, with James scoring 41 points in each contest.

In Game 7, James’ memorable block of Andre Iguodala’s shot late in the game with the score tied put the Cavaliers in position to take the lead. During a timeout that set up Kyrie Irving’s game-winning shot, head coach Tyronn Lue offered up motivation and James capped it with a succinct message.

They got the bucket and soon captured the franchise’s first-ever title.

Lue has compared the pressure James has faced to that of Kevin Garnett in Boston.

“KG was so engaged in the game that he couldn’t really enjoy it,” Lue said. “I’m hoping, now that LeBron won a championship in Cleveland, he can really just enjoy the game and the city and the camaraderie and being the best player in the world, without all the pressure.”

Based on James’ attitude, that pressure will likely remain for the rest of his career, given his desire to be the best ever.