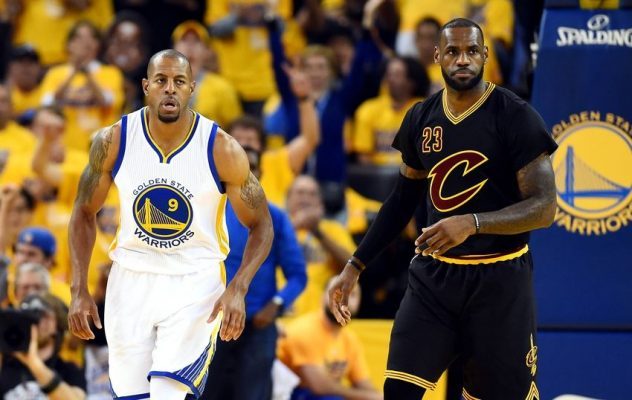 Prior to taking a shot at the Cleveland Cavaliers’ historic comeback to win the NBA title, Golden State Warriors forward Andre Iguodala took time to acknowledge, among other things, that LeBron James‘ rank is among the top five players in NBA history.

Iguodala made the remarks on July 14 during an appearance on a radio show called “The Breakfast Club.” The conversation began by referencing James’ iconic block of Iguodala that soon led to Kyrie Irving’s game-winning three-pointer.

“That’s what he does a lot,” Iguodala said. “You can get mad at certain plays, but when you have unbelievable human beings doing some crazy, freakish things, what are you going to do?”

Iguodala then was asked if he was emotional over the result:

“No, I didn’t cry,” Iguodala continued. “I was upset at our team for letting it get to Game 7.”

Expressing some annoyance with the hosts, Iguodala said that Irving deserved more credit than he’d been given, which led into his reference to James’ stature among the greats of the game.

“You take a lot of credit away from Kyrie,” Iguodala said. “I mean, LeBron, top five greatest player of all-time. Nobody’s near Michael Jordan, stop arguing about that, but Kyrie was a monster.”